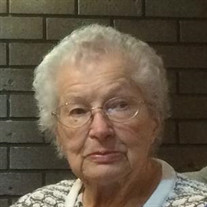 Madge Caroline Blancken Martin was born January 7, 1924, on the family farm SE of Flagler, Colorado. She was the third daughter of George and Wilhelminia (Settgast) Blancken and was welcomed by her two sisters, Helen and Harriet, and brother, George Jr. Later she helped babysit a brother, Richard, and three more sisters, Velma, Eunice, and Nona, during the 1930's depression and dust bowl era of Eastern Colorado. Madge was baptized and confirmed at the Zion Lutheran Church in Flagler, CO. She attended the Second Central country school and graduated from Flagler High School. During high school she played the trombone in the school band and played softball during the summer time while helping her parents on the farm until she joined her sister, Harriet, working at the Goodyear Station in Denver, CO. It was here where Madge met her future husband, LaVern Martin, who was stationed at Lowery Air Force Base. While LaVern was overseas, Madge returned home to stay with her parents and await the birth of son, LaVern Delmar, who was born at the Flagler Hospital. After Vern's discharge, they returned to his home at Caldwell, Idaho, later moving to Hermiston, Oregon, building houses. Their son, Delmar, was severely injured in a swimming accident, at the age of 15, finished high school with his class, graduated with a master's degree and became a junior high science and math teacher in Corvallis, Oregon, where Delmar met his future wife, Elizabeth Kalowski. After Vern retired from carpentry work, he and Madge began their own real estate company in Philomath, Timbertown Realty. You might say that Madge and Vern never left any grass grow under their feet--gardening and canning. Madge developed her artistic skills of ceramics, drawing, and artwork. She was also well known as a quilter and completed the quilt that her mother, Minnie Blancken, and the Second Central Club ladies began in the 1940's. Madge donated the quilt to the Flagler historic Second Central School and it is on display there. Madge was preceded in death by her husband, LaVern, and son, Delmar, sisters Julia Marie, Helen Wake and Harriet Jones; also two brothers George and Richard Blancken. She is survived by her daughter-in-law, Elizabeth, who so faithfully cared for Madge in Corvallis; Elizabeth's, sons, Peter and Alex Moeller and Delmar’s foster son Gordon Worden. Also her “adopted” family: Josef Rene Argueta and wife Lisa and children Sara and Isaac, Rene’s sister Emilia and husband Greg Short and children Emily Zuniga, Victor Zuniga, Amanda Short, Zachary Short. Surviving sisters are Velma (George) Nordine of Bloomington, IL, Eunice (Laurel) Niemann of Flagler, CO, Nona (Arnold, recently deceased) Zielke of Lemmon, SD, and sister-in-law, Joy (Richard) Blancken of Flagler, CO. as well as numerous nieces, nephews, and cousins. Madge will also be remembered as the granddaughter of Diedrich and Marie Blancken who homesteaded west of Flagler, a niece of Henry and Mary Blancken who operated the Flagler Hotel in Flagler in the early 1900's, a niece of Oliver and Minnie Blancken and Natalie and Elmer Kueker all of Flagler. Both Diedrich, Henry and their families were charter members of Flagler Zion Lutheran Church, Mo. Synod with services first meeting in their homes. There are no real words that can express the love and devotion that Madge had for her families--a devoted wife and mother, a daughter and sister. We all depended on Madge for her wisdom, advice and her Christian faith. There is not enough space to write of all the good works and hard work she has done in her life time. Madge will be missed. She is now at home in heaven. Madge died at the age of 91 on May 2, 2015, at her son and daughter-in-laws home in Corvallis, Oregon. Donations can be given to Evergreen Hospice. Family and friends are invited to her Funeral Service, 11:00 a.m. Friday, May 15, 2015 at DeMoss-Durdan Funeral Home, 815 NW Buchanan Avenue, Corvallis, with burial at Twin Oaks Memorial Park immediately following service. Please share your thoughts and memories for the family at www.demossdurdan.com

Madge Caroline Blancken Martin was born January 7, 1924, on the family farm SE of Flagler, Colorado. She was the third daughter of George and Wilhelminia (Settgast) Blancken and was welcomed by her two sisters, Helen and Harriet, and brother,... View Obituary & Service Information

The family of Madge Caroline Martin created this Life Tributes page to make it easy to share your memories.