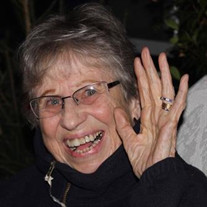 With great sadness we note the passing of Margaret Josephine Orsi on Sunday July 28, 2019. Margaret, aged 91 was mother, grandmother and friend to many. Although, 91 her passing is still too soon, still sad. It is hard to imagine life without her. What does help is remembering how she lived. She was born a Corvallis Girl! Attending grade, middle and high school here she developed lifelong dear friends. Corvallis would be the hub for a very active and adventure filled life. Raised by wonderful parents, Hulda and Harlow Atwood, Margaret came of age during WWII and her reaction to this tragedy was emboldened and adventurous. Life and the world were things to be seized, explored and experienced! And she did. Like her mother before her she joined Delta Gamma sorority, attended and graduated from Willamette University, Class of 1950 with a degree in psychology. Her first job with Crown Zellerback took her to San Francisco but she grew restless. She joined the State Department’s Foreign Service and after a crash course in Italian in Washington DC, was stationed in Bari and Florence. She was assigned a driver, and a maid who would lay out her clothes, dress her and cook. Oh My! In true Margaret fashion she would frequently miss the driver because she was late! An American girl in Italy in the 1950’s! Margaret took advantage of time aboard making several side trips including one to England to catch Queen Elizabeth’s coronation. Most importantly though Margaret went on a chance blind date and met our father Vincenzo Orsi, an engineering student. Margaret was embraced by the Orsi family and after a courtship of 5 years she and Vincenzo were married in the Pitti Palace in Florence. They wanted to have children and thought America would give them the best chance, so, they hopped on a steamer and landed in New York, driving cross country to Corvallis. Margaret and Vincenzo would have 4 children living in Hillsboro, Albany and Corvallis. Margaret was a stay at home mom while Vincenzo worked. The family was loving, vibrant and happy. Tragically Vincenzo died in 1972 and Margaret, now a widower with 4 kids aged 10-13 had to make big adjustments. In 1969 she found work at Linn Benton Community College, an upstart at that time. She would work there 21 years retiring in 1991 serving in several capacities from library clerk to secretary to the president and became known as Mother Margaret. Often a pioneer she started the College’s recycling program. Her adventurous spirit expressed itself as she became devoted to several causes from Volkswalks to protest movements. She was part of women’s changing roles and was complicated because she still needed help turning a screw driver. Margaret never “settled” into retirement. She loved her Otter Rock Beach cabin. She was active in several book, support and women’s groups, and her community causes. She traveled extensively riding elephants in India, walking the Great Wall of China at 62, parasailing in Mexico, getting her first tattoo at 75, riding a hot air balloon ride at 80. In all, she explored over a dozen countries. She started when ship travel was common and the airplanes had propellers. Her last plane ride was in 2016 for her granddaughters college graduation. She made the impossible seem possible. She wanted her family gathered for every holiday and she loved parties. We even celebrated her 91st birthday with hats and streamers! In the early 2000 Margaret found love again. She was reunited with a man she had met 50 years before in San Francisco. Back then he proposed but she said no and set off for Italy. In 2001 on a lark she wrote him a letter and they reconnected and had several good years together until his passing. At his service his daughter with evident gratitude, publicly thanked Margaret for “giving my dad the 10 best years of his life”. Of this, I have no doubt. She had a way. Margaret had fun and enjoyed life. She loved her family and friends. She befriended all kinds of people with varying creeds, ages and persuasions. She always had a curious nature and interest in people, their stories and the world. She was friends with her kids friends, often being a surrogate mother/mentor. She always wanted to be updated about their lives and corresponded directly with several. Margaret’s humor, enthusiasm, thirst for knowledge, curiosity, charm and grace touched many and made her an important part of people’s lives. Her relationships were special and meaningful whether friendships since childhood or caregivers who helped her the last six months. These many relationships were the result of Margaret’s unique presence. She truly connected with people and our family never stopped growing because mom befriended so many over the years. She was one of a kind and will be missed. A celebration of life is being held on Saturday August 24, 2019, 2-6pm at the Hanson Country Inn, 795 SW Hanson Street, Corvallis Oregon 97333. Margaret had well over 150 causes to which she regularly donated. In lieu of gifts/flowers please consider making a donation to your favorite cause in her name. We welcome your stories, photos or memories to share at the gathering. If unable to attend please feel free to send your memories to us. C/O Lewis and Kathy Orsi 2215 NW 13th St Corvallis Oregon 97330, or email at [email protected] She is survived by her children, Lewis (Kathy), Barbara, Stephen, grandchildren Nick and Kate, Sister-in-Law Karen Atwood, Nieces Vickie Atwood and Traci Atwood (Bob). She was preceded in death by her husband Vincenzo Orsi, daughter Catherine Orsi, parents Harlow and Hulda Atwood, brother Harlow Jr “Bub” Atwood.

With great sadness we note the passing of Margaret Josephine Orsi on Sunday July 28, 2019. Margaret, aged 91 was mother, grandmother and friend to many. Although, 91 her passing is still too soon, still sad. It is hard to imagine life without... View Obituary & Service Information

The family of Margaret J. Orsi created this Life Tributes page to make it easy to share your memories.

With great sadness we note the passing of Margaret Josephine...