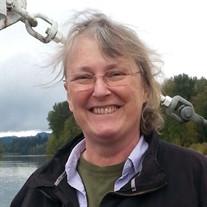 Margaret Anne “Peggy” Sparrow, the youngest of five siblings, was born in Berkeley, California, to John P. Sparrow and Nan Reynolds Sparrow. She grew up watching the ’60s demonstrations (from a safe distance!) and the cultural changes that followed. She attended Lowell Whiteman School in Steamboat Springs, Colorado, for high school. She was proud of her Berkeley heritage, but chose to attend UC Davis for her college education, majoring in Environmental Toxicology. After graduating from UC Davis in 1978, she worked for three years for Del Monte Foods Research Center in Walnut Creek, California, as a pesticide residue chemist. She moved to Oregon in 1981 to work in the College of Oceanography at OSU as a marine chemist, where she worked for 31 years until retiring in 2011. Her passion was everything ocean related including sailing, fishing and boating and loved going to sea on research cruises and traveling to many foreign countries. One career highlight was participating in an undersea dive on the Alvin submarine out of Easter Island in 1998, observing hydrothermal vents and the unique biology associated with hydrothermal areas. She began studying flamenco guitar at an early age and was able to purchase a guitar from the famed Ramirez shop in Spain while studying abroad during high school. In the 1980s and 1990s she became part of Amor España, a flamenco group that performed in Oregon and Washington. She was also a brilliant scrabble player. She is survived by her loving wife, Kay Ann Fischer; son Will Voorhies of Phoenix, Oregon; daughter Maya Nan Voorhies (Nathan Harrington) of Williams, Oregon; brothers Denis Drew (Barbara Drew) of Nevada City, California, and Jack Sparrow (Sandra Sparrow) of Guemes Island, Washington; and sisters Debbie Drew of Oakland, California, and Kathy Sparrow (David Turchin) of Sebastopol, California. She is also survived by her nieces, Aisha Drew and Shawna Sparrow; nephews Tim Drew and Nathan Sparrow; and a great-nephew, Andrew Sparrow. Margaret passed at age 60 following a three year battle with glioblastoma multiforme, a type of brain tumor. The family wishes to thank the many members of the medical community that helped her along her journey and most especially Benton Hospice Service, which cared for her in her final months. A celebration of life will be at 1 p.m. Sunday, May 29, The Vue, 517 S.W. Second St., Corvallis. The family requests that donations/memorials be directed to: National Brain Tumor Society (http://braintumor.org/join-the-fight/ways-to-give) or Benton Hospice Service (www.bentonhospice.org/donate).

Margaret Anne &#8220;Peggy&#8221; Sparrow, the youngest of five siblings, was born in Berkeley, California, to John P. Sparrow and Nan Reynolds Sparrow. She grew up watching the &#8217;60s demonstrations (from a safe distance!) and the cultural... View Obituary & Service Information

The family of Margaret A. Sparrow created this Life Tributes page to make it easy to share your memories.