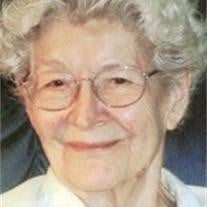 Nov. 17, 1917 - Dec. 5, 2009 Margaret Evelyn Sutherland, 92, was born in Robinette, which is now covered by the Snake River, to Mabel Carothers Houston and Thomas Jefferson Houston. She graduated from Echo High School in Echo in 1935, and then started cooking for ranch crews with her mother. Margaret was married to Russell Mahlon Sutherland in 1938 and had two children, Johnnie David and Julianne. Margaret, Johnnie and Julie, along with Mabel and Tom Houston, bought a house in Weston in 1948. Margaret became the city librarian in 1953, and remained for 42 years. The library became a gathering place for young and old, with an environment of love and acceptance for all. Margaret became a friend and confidante to many in Weston, and like a second mother to Sally Sams Kosey, Georgiann Licht, Susan Gordon Rogers and Beckie Tucker Bronson. She felt her job in life was to be of service to everyone. Her favorite sentence was, "What can I do to help?" There was nothing she liked better than her family, her dogs and books, especially mysteries and Oregon history. She loved Oregon, and was very proud to be a fourth-generation Oregonian. The Weston Library is noted for its plethora of Oregon history material because of Margaret's knowledge and interest in Oregon. Survivors include her children, Johnnie David Sutherland, who is a retired map librarian from the University of Georgia in Athens, Ga., and Julianne Sutherland, a retired teacher from Corvallis; granddaughter Angela Jean Trump; grandson-in-law Phillip Chappell; and great-grandson Harley Chappell. Her brother, Charles Houston of Bend, also survives her. At the time of her death, she was living with her daughter and great-grandson in Corvallis. Urn burial services will take place at a later date, probably in April or May, in Weston. In memory of Margaret, please make donations to the Weston Public Library or the Weston Community Church.

Nov. 17, 1917 - Dec. 5, 2009 Margaret Evelyn Sutherland, 92, was born in Robinette, which is now covered by the Snake River, to Mabel Carothers Houston and Thomas Jefferson Houston. She graduated from Echo High School in Echo in 1935, and... View Obituary & Service Information

The family of Margaret Sutherland created this Life Tributes page to make it easy to share your memories.