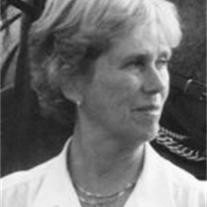 Marguerite Elizabeth (Mooney) Dalton passed away quietly at her home in Corvallis, Ore., Saturday, May 18, 2008. “Mickey”, born in 1924 in Aachen, Germany, lived a life of great adventure and beauty. She immigrated to the United States in 1946 as one of the first German war brides to arrive in the country. After living in Minnesota for 10 years, she moved with her family to the Bay Area in California where she raised her three children. Many happy weekends and holidays were spent in their cabin in Squaw Valley where the front door was always open and a bottle of good cheer awaited anyone (and there were many!) who came through it. She was an inspiration to her children and though her love for them was always the first thing that came through, she instilled in them a sense of pride, confidence and respect for their fellow man. In 1969 Mickey married the love other life, Robert Dock Dalton, Jr., in Oakland, Calif. From that day forward it was one adventure after another for them. In addition to traveling extensively, they spent 14 years on a beautiful ranch in Fall River Mills, Calif., where they raised every kind of four legged creature that came down their driveway, caring for and naming each and every one of them. It was during that time that Mickey was able to fulfill a lifetime dream of raising horses. There was barely a day that went by where you would not find her out on her horse at 5 a.m., riding the fence line and making sure all her animals were well tended to. After retiring from the farm life, they moved back to their home in Alameda, Calif., where they were able to pick up a quieter pace and began to enjoy the company of old friends, children and grandchildren. In 2006 Mickey made her final move to Corvallis, Ore. The rolling green hills and snowcapped mountains reminded her of her home in Bavaria, Germany, so she and Bob made this their last adventure. The animals were fewer, the land was tended to by someone else and they enjoyed their days together peacefully and quietly. Mickey is survived by her loving husband of 39 years, Robert Dalton; children, Miki Mooney of Hailey, Idaho, Patrick Mooney of Truckee, Calif., and Dan Mooney of Bend, Ore.; grandchildren (and spouses), Danielle (and Brian) South of Charlotte, N.C., Noah (and Jodi) Richter of Boise, Idaho, Tyler Corrock of Ketchum, Idaho. Sean and Kiernan Mooney of Truckee, Calif., and Megan Mooney of Bend, Ore.; and one great-grandson, Parker South of Charlotte, N.C. Her son, Jon Dalton, preceded her in death in 2003. In lieu of flowers the family requests that donations be made in her name to The Society of Progressive Supranuclear Palsy, 11350 McCormick Road, Hunt Valley, MD, 21031.

Marguerite Elizabeth (Mooney) Dalton passed away quietly at her home in Corvallis, Ore., Saturday, May 18, 2008. “Mickey”, born in 1924 in Aachen, Germany, lived a life of great adventure and beauty. She immigrated to the United States... View Obituary & Service Information

The family of Marguerite “Mickey” Dalton created this Life Tributes page to make it easy to share your memories.

Marguerite Elizabeth (Mooney) Dalton passed away quietly at her...