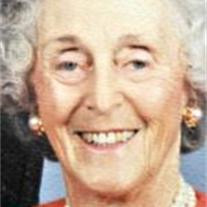 March 31, 1911 - April 30, 2010 At 9:15 a.m. on Friday, April 30, 2010, Marion Moseley Gathercoal passed over to "fill up her dance card," escorted by her husband of 78 years, Paul, who predeceased her in November 2009. Marion was born on March 31, 1911, to Wayne Thornton Moseley and Josephine Wells Moseley in Cando, N.D., where her father was a lawyer and church music director, and her mother was a school teacher. When Marion was a child, her mother taught her to "take advantage of all her opportunities, no matter how small," and Marion spent a lifetime living by that teaching. From her childhood on, the arts were an integral part of her life. Later, at Northwestern University, she majored in drama and minored in music, and appeared in eight operas for the Chicago Conservatory of Music. She married Paul Gathercoal in 1931, and moved to Corvallis in 1940. At that time the population was only 7,000, and everyone knew everyone. In the midst of raising four children, Paul, Bonny, Peggy and Forrest, Marion found time to lead community and state organizations, including women's clubs and mothers' clubs. She created the Corvallis Centennial Pageant and two Fourth of July pageants; was involved in the Benton County Historical Society; developed a children's theatre; was "Lady Marion" on KOAC, reading children's stories; was a Boy Scout leader; was a member of the Mariners and the Oatana Dance Club; served on the Governor's Advisory Committee for the Arts and Humanities from 1966 to 1973; and was honored in 1964 with the Corvallis Citizen of the Year Award in recognition of her outstanding community service. Later in life, she enjoyed presenting her "Century of Fashion" style shows at Corvallis' Majestic Theatre to raise money for P.E.O. scholarships and the Good Samaritan Hospital Auxiliary. She was a loyal and active member of the Federated Churches of Corvallis, Chapter BP of P.E.O., the Winema Chapter of Daughters of the American Revolution, the Friday Study Club, Chi Omega Sorority and the Birthday Belles, and sang in the OK (Old Kids) Chorale. With her husband, she was a golfer; an adventurous world traveler; an avid fan of Oregon State University sports, the NFL Seahawks and the MLB Mariners; and, according to Paul, "she could burn Jell-O." Her family got used to this. However, the achievement she held most dear is the founding and development of the Corvallis Arts Center. People who knew Marion insist that without her, the center would never have happened. The affectionate words people use to describe her range from "dynamic," "the driving force," "organized" and "sophisticated and elegant" to "the protective spirit over the whole enterprise." Marion was an intuitive, caring, visionary and dutiful wife and mother who loved her family and community very deeply, and we all loved her! Marion passes the gavel to all who will bring to their families and community any and all contributions of sharing they have to continue the love and excellence in creating a better home and community environment in which to live. She is survived by her older brother, Forrest Moseley of Portage, Wis.; son Forrest Gathercoal, J.D., and wife, Joan; daughter Peggy J. Poling, Ph.D., and husband, Dow; and daughter Bonny Gathercoal Potter, all of Corvallis; son Paul H. Gathercoal Jr., Ph.D., and wife Gwen of Coeur d'Alene, Idaho; nine grandchildren; 13 great-grandchildren; and seven great-great-grandchildren. A memorial service will take place at 4 p.m. Tuesday, June 1, at the First Presbyterian Church of Corvallis, 114 S.W. Eighth St. A reception will follow at 5 p.m. at Marion's beloved Corvallis Arts Center across Central Park. In lieu of flowers, please help Marion continue giving to The Arts Center. Marion's entire family is grateful for all your thoughts and remembrances during this celebration of Marion's life.

The family of Marion Gathercoal created this Life Tributes page to make it easy to share your memories.