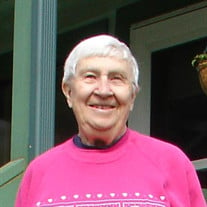 Marion Weast was born on August 22, 1926 in Marion, Indiana to two loving parents, Eulys and Kitty Dyer. She was close to her older brother Eugene and younger brothers David and Eulys. The small pension her father earned as a mechanic in Indiana later got the family through the tough times of the depression. When Marion was a young girl the family moved to Tucson Arizona to help her father's tuberculosis where her mother did laundry and other tasks to help support the family. She often reminisced about playing in the desert, pouring water down tarantula holes to get them to pop out. She recalled sitting in a movie theater with a girlfriend when she was 15 and the movie stopping and someone coming in to announce that Pearl Harbor had been attacked and she remembered how the world had changed. After the war the family moved to California where Marion met her first husband. They had two boys, Don and then Gary, and Marion dedicated her life to them. Photos show her joy during that time. If asked, Marion always described herself as a mother before anything else. Later Marion divorced and remarried. She and her second husband, Gordon, moved to Oregon so he could work on a ship out of Newport . Eventually, they settled down in Philomath on 7 acres, raising their son Eugene as well as some goats, chickens, and dogs. Marion canned food from the garden and often helped at Gene's school. After Gordon's death, Marion moved close to her work at the OSU bookstore in Corvallis . She rented a small house near the OSU campus, which she eventually bought, and lived there for 25 years. She was an avid gardener, filling every corner of the property with shrubs, trees, and flowers. She worked with people who became friends, helped her son get through college, and enjoyed visits from family. Marion died of complications from dementia March 17, 2015. Marion is survived by her three sons, four grandchildren and seven great-grandchildren. They and her friends Pam and Ken were always in her thoughts. A celebration of her life will be held at 2pm on May 23rd at the Walnut Barn rain or shine. The Walnut Barn is located in Martin Luther King Jr. Park , on the west side of Walnut Boulevard . The park is located at 4905 NW Walnut Blvd approximately 1 mile west of Witham Hill Drive, or 2 miles north of the intersection of 53rd Street and Harrison Boulevard. A BBQ buffet will be served after the service. Please bring stories about Marion to share and RSVP if you plan to attend by texting or calling her son Gene at 541-231-6919 so he knows how much food is needed. Dress warm and dress comfortable, this is a partly outdoor event.

Marion Weast was born on August 22, 1926 in Marion, Indiana to two loving parents, Eulys and Kitty Dyer. She was close to her older brother Eugene and younger brothers David and Eulys. The small pension her father earned as a mechanic in Indiana... View Obituary & Service Information

The family of Marion Frances Weast created this Life Tributes page to make it easy to share your memories.