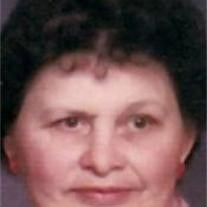 On Thursday, May 10, Marjorie J. Mersereau passed away peacefully in Corvallis. She was 84. She was born on Sept. 7, 1927, in Portland, and was the only child of Frende Burwell and Margaret Jane Flitcraft. Marjorie spent her childhood in Spokane and Walla Walla, Wash. The family moved to Portland, where Marjorie graduated from Beaverton High School. At age 16, she worked as manager of housewares at Lipman’s, and in the Portland shipyards during World War II. She attended Oregon State College, studying business and home economics while living at the Pines. She met Roswell in college, and in June of 1948 they married in Portland. They were married 64 years, and had nine children. Marjorie had a loving personality and always tried to please others. She and Ross raised their large family while moving from Springfield to Eugene to Corvallis, ending up in Blue River. Marjorie decorated wedding cakes, was active in Presbyterian church activities, and was a Cub Scout den mother and president of the Lane County Extension Advisory Board. After 12 years in Blue River, they moved back to Corvallis. Marjorie opened Wildflower Bagels and Deli in Philomath. She enjoyed gardening and sewing. She spent two years compiling a genealogy book chronicling the Flitcraft family, and later one about the Snyder family. She was a member of the Daughters of the American Revolution. She spent the last few years enjoying her loving family, and leaves behind husband Ross; children Gary, Linda, Jim, Claudia Wise, Joel, Judi Shimabuku, Cheryl Miller, Lisa Endicott and David; 16 grandchildren; and three great-grandchildren. Marjorie will be greatly missed by her family and friends whose lives she touched. The family asks that in lieu of flowers, donations should be sent to the Daughters of the American Revolution — Oregon State Museums in memory of Marjorie Mersereau; pay to the order of OSS DAR. Send to Jenie Bunge, DAR state treasurer, 13391 S.W. Deergrove Lane, Tigard, OR 97224. A memorial service will take place at 2 p.m. Monday, May 21, at DeMoss-Durdan Funeral Home in Corvallis.

On Thursday, May 10, Marjorie J. Mersereau passed away peacefully in Corvallis. She was 84. She was born on Sept. 7, 1927, in Portland, and was the only child of Frende Burwell and Margaret Jane Flitcraft. Marjorie spent her childhood... View Obituary & Service Information

The family of Marjorie Mersereau created this Life Tributes page to make it easy to share your memories.

On Thursday, May 10, Marjorie J. Mersereau passed away peacefully...