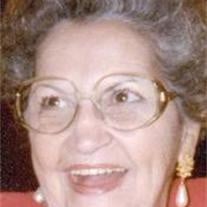 Mary Elizabeth Brown of Corvallis died Monday after three weeks in hospice care. She was 91. Mary, known as "Ibie" to her family, was born in Girard, Ill., the daughter of Hal M. Routzahn and Mary Alma (Warrick) Routzahn Hamilton. She married Edward F. Brown on Oct. 29, 1938, in St. Louis, Mo. She and Ed lived in Dearborn and East Lansing, Mich.; Mission, Kan.; Auburn, Ill.; and St. Louis before moving to Corvallis in 1971. As a child, Mary took up dancing, and was an active ballet and tap dancer into her adulthood. She often reminisced about taking the train to Springfield, Ill., by herself as a child for her dance lessons. Later she taught dance. After arriving in Corvallis, Mary was employed in office and administrative work by Neptune Microfloc (later Honeywell) until her retirement in June 1984. Her hobbies included bowling, playing cards and being with friends. Most of all, she loved dancing with her husband, Ed, and they were often seen at the Corvallis Elks and Moose lodges. Mary was known for her kindness, sympathetic nature, and quick wit, and for her stunning laugh. Following Ed's death in 1984, Mary became active in volunteer activities, including the Corvallis Arts Center, the Corvallis Senior Center, the Retired and Senior Volunteer Program, and the Good Samaritan Hospital Auxiliary. She was a lifetime member of the Order of the Eastern Star. In 1996, she moved to Samaritan Village, where she resided until 2010, and where she was active in numerous activities and committees. She resided at Corvallis Caring Place throughout 2010, and Corvallis Manor until her death. Mary's survivors include sons Chester E. Brown of Austin, Texas, and Todd G. Brown of Corvallis; grandchildren Eric Brown of Corvallis, Chad Brown of Austin, Rebecca Peterson of Philomath, and Ryan Brown of Austin; and two great-granddaughters. There will be no funeral service. A small memorial gathering for her family and friends from the Samaritan Village coffee group will take place at 7 p.m. Thursday, March 3, at Samaritan Village. Call Samaritan Village at 541-758-7888 for more information. Contributions can be made to Samaritan Village, Corvallis Caring Place or Benton Hospice Service.

Mary Elizabeth Brown of Corvallis died Monday after three weeks in hospice care. She was 91. Mary, known as "Ibie" to her family, was born in Girard, Ill., the daughter of Hal M. Routzahn and Mary Alma (Warrick) Routzahn Hamilton. She married... View Obituary & Service Information

The family of Mary Brown created this Life Tributes page to make it easy to share your memories.