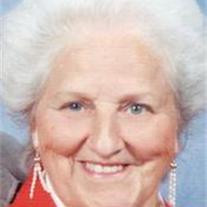 Mary Highland DiGiulio of Corvallis died Thursday, March 31, at Good Samaritan Regional Medical Center. She was 85 years of age. Mary was born on May 27, 1925, in Pecatonica, Ill., to Margaret Clare and Joseph Earl Highland. She grew up on the family farm with her nine brothers and two sisters. She lost her dad, Earl, in 1940 in a farming accident. Her mother, Clare, and the 12 kids worked hard to keep the farm going and the family together. Mary was licensed as a nurse in 1947 in Illinois, and worked in nursing for 15 years, mainly as a surgical nurse. She married Albert DiGiulio in 1950 in Chicago, Ill. They had two children, James Anthony DiGiulio and Theresa Anne DiGiulio, and eventually settled in Arlington Heights, Ill. Following her daughter’s birth, Mary retired from nursing, and began a second career working in a craft store. This accompanied a 40-year-long interest in crafts, particularly knitting and needlepoint. She also had a lifelong interest in playing bridge, as did her husband, Albert. Following Albert’s retirement from being an electrical engineer, Mary and Albert lived for several years in Hawthorn Woods, Ill., and then relocated to Corvallis in 1998 to be close to their grandchildren. Albert preceded Mary in death in April 2010. Mary resided at West Hills Assisted Living Facility. Mary is survived by her daughter, Theresa DiGiulio of Chicago; her son, Jim DiGiulio, daughter-in-law, Kelly Donegan, and grandchildren Candice DiGiulio and Chloe Donegan, all of Corvallis; sisters Jane Buggs of Janesville, Wis., and Ann Caron, of Rockford, Ill.; and brothers Jim Highland of Pecatonica, John Highland of Overland Park, Kan., and Joseph Highland of San Diego, Calif. She was preceded in death by her brothers Bill Highland, Dick Highland, Barney Highland, Bob Highland, Paul Highland and Tom Highland.

Mary Highland DiGiulio of Corvallis died Thursday, March 31, at Good Samaritan Regional Medical Center. She was 85 years of age. Mary was born on May 27, 1925, in Pecatonica, Ill., to Margaret Clare and Joseph Earl Highland. She grew up... View Obituary & Service Information

The family of Mary DiGiulio created this Life Tributes page to make it easy to share your memories.