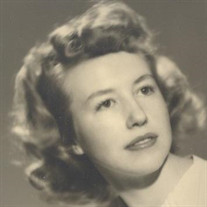 Mary Louise Rule Read, age 91, a Corvallis resident since 2004, died peacefully at Conifer House in Corvallis on August 24, 2018 while under the compassionate care of Lumina Hospice. Marylou was born February 6, 1927 in Bovina, Colorado to Ralph Allen Rule and Olive Carolyn (Burge) Rule. The family moved to Paonia, Colorado where Marylou and her sisters grew up, graduated from high school, and met their spouses. Marylou married George Vinton Read in 1947 in Paonia. They later moved to Rio Vista, CA and then to Walnut Creek, CA, where Vinton pursued a career in education and they raised their family. Marylou was a gentle, sweet woman who had her hands full raising three rambunctious sons, and was known for her amazing memory and her infectious spirit. Vinton died in 2004, and Marylou moved to Corvallis, OR to be close to two of her sons. Her parents and her sisters Virginia Crawford, Margaret Wood, and Norma Wood also predeceased her. She is survived by her sister Janet Sparks of Broomfield, CO, three sons, Norman Read, (Albany, OR), Robert Read (Gale) (Corvallis, OR), and Craig Read (Kelly) (Missoula, MT), and three grandchildren, Dena Read (San Diego, CA), Kendra Read (Patrick Lynch) (Seattle, WA), and Jonathan Read (Corvallis, OR). The family would like to express its deepest appreciation to all of Marylou’s friends and caregivers who have touched and enriched the last years of her life. At her request there will be no memorial service. Please share your thoughts and memories for the family at www.demossdurdan.com

Mary Louise Rule Read, age 91, a Corvallis resident since 2004, died peacefully at Conifer House in Corvallis on August 24, 2018 while under the compassionate care of Lumina Hospice. Marylou was born February 6, 1927 in Bovina, Colorado to... View Obituary & Service Information

The family of Mary L. Read created this Life Tributes page to make it easy to share your memories.