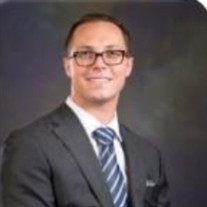 Michael Joseph Hynds, 27, of Indianapolis, Indiana passed away on December 15, 2021, in Corvallis, Oregon. A Celebration of Life will be held from 4:30-7:00 PM on Tuesday, December 21, 2021, at St. Susanna Parish Event Center, 1210 E. Main St, Plainfield, IN. This will be a casual gathering for family and friends to celebrate Michael with a short prayer service at 5:00 PM. Michael was born in Indianapolis, IN to Philip Edward Hynds and Ann Marie Hynds on May 17, 1994. Michael went to school in Plainfield, IN, graduating from Plainfield High School in 2013. He then attended Indiana University where he graduated in 2017 with a BS in Neuroscience. After graduation, Michael joined Western University College of Osteopathic Medicine in Lebanon, Oregon to pursue his DO Degree. He was just several months shy of completing his medical degree and was enthusiastic about becoming a surgeon. Michael never knew a stranger, and we know he would have been a skilled physician with a warm, caring bedside manner. Michael is survived by his parents, Philip Edward (Michelle) Hynds and Ann Marie Hynds; brothers Patrick Christopher, Simon Matthew, and Samuel Alexander; grandmother, Charleen Marie Warner; and many loving aunts, uncles, cousins, and friends. In memory of Michael Joseph Hynds, a scholarship will be established for students in the Western University Health Sciences College of Osteopathic Medicine of the Pacific. https://alumnifriends.westernu.edu/pages/giving/giving-forms/giving-form---michael-j.-hynds-memorial-scholarship “…I’d like to go by climbing a birch tree, And climb black branches up a snow-white trunk Toward heaven, till the tree could bear no more, But dipped its top and set me down again. That would be good both going and coming back. One could do worse than be a swinger of branches.” Excerpt from “Birches” by Robert Frost, one of Michael’s favorite poems

The family of Michael Joseph Hynds created this Life Tributes page to make it easy to share your memories.