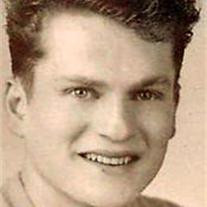 April 15, 1926 — Oct. 24, 2012 Lonnie Webb, 86, died Oct. 24 at home in Corvallis, surrounded by family. It was his wish to stay at home, so his family cared for him there. He was always glad when the hospice nurses visited and when his children were with him. Lonnie was born the youngest of five children and was raised in North Bend by his maternal grandparents, Edward and Margaret Culbertson Webb, who were “natives of Mt. Sterling, Kentucky.” He left school to join the U.S. Navy on Aug. 16, 1943. He served as a Navy electrician 3/C for 33 months including 30 months on the Aircraft Carrier Enterprise, and received battle ribbons for Asiatic-Pacific Campaign 10 and Philippines Liberation 2. During heavy fighting, the Enterprise was reported four times as having been sunk by the Japanese. A Zero attack exploded down an open elevator shaft, tearing a hole in the ship’s hull. Sailors stuffed mattresses and bags of cement in the hole before she headed for home. Lonnie served aboard the “Big E” as she squeezed through the Panama Canal and went to Europe to bring home troops. Lonnie spent leave time in Japan and London, and spent a New Year’s Eve in Times Square, New York. Lonnie’s $700 Oregon Veteran’s bonus went toward his first car in 1946. He returned to school and graduated from North Bend High School in 1949. As a returning veteran, he was honored and “spoiled,” according to Billee Snead, who was in his biology class. His feet were up on the seat and his chair tilted back as he flew paper airplanes out of the second-story classroom window; however, he was the best friend of her best friend. They were married Jan. 6, 1951, raised six children (who all live in the Willamette Valley), welcomed 18 grandchildren and four great-grandchildren, and celebrated 61 years of marriage. Lonnie worked at Coquille Lumber and Menasha Plywood Pulp and Paper before he was hired in 1969 as an industrial millwright at Teledyne Wah Chang in Albany. He worked there for 40 years before his retirement. He loved clamming, bowling, barbecuing, grocery shopping and cooking, family and being at home. In 1969, there were Webb children in four schools, and his wife, Billee, started at Oregon State University. The family earned six college degrees before Lonnie retired. Lonnie is survived by his wife, Billee Snead Webb; children Brent and Sue King Webb, John and Cydnie Webb Meyer, Barry Webb and Cheryl Webb, all of Corvallis, Bruce Webb and Cindy Kok of Salem, and Brad and Brenda Webb of Albany; 18 grandchildren; four great-grandchildren; sister Joan Mathews Pederson of North Bend; and nieces and nephews, who are the children of Harold and Betty Snead Reeve and Richard and Sande Walatick Snead. A celebration of Lonnie’s life will take place from 2 to 6 p.m. Saturday, Nov. 10. Call 541-752-6204 for directions.

April 15, 1926 — Oct. 24, 2012 Lonnie Webb, 86, died Oct. 24 at home in Corvallis, surrounded by family. It was his wish to stay at home, so his family cared for him there. He was always glad when the hospice nurses visited and when his... View Obituary & Service Information

The family of Millard Lon Webb created this Life Tributes page to make it easy to share your memories.