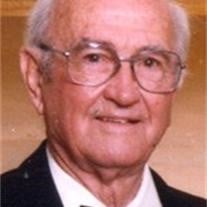 Sixty-four years, two months and 19 days: That is how long their marriage lasted - until Mother's death three years ago, and now Dad has finally gotten his wish "to go be with Jessie." Milton Edwin "Ed" Woodcock Jr. passed away Monday, Aug. 17, 2009, with his daughters by his side and his son on the phone from Terre Haute, Ind. Dad grew up in Corvallis, born April 12, 1917, to Mary Baird and M.E. Woodcock. He was one of five children: two sisters, Jane and Cynthia, and two brothers, Bill and Baird. He loved sports, and excelled in track and field, golf and baseball, and held Oregon State University football season tickets for 30 years. Dad held the OSU high-jump record for 14 years, perfecting the Western Roll, jumping to a height of 6 feet, 8 inches. That record was broken by another high-jumper named Moss, and later Dick Fosbury and the Fosbury Flop took it to new heights. The Woodcock family briefly lived in Pasadena, Calif., where Dad attended Pasadena Junior College, lower division, and received a high school diploma in 1934. He attended OSU for the better part of four years, starting in 1935, lacking just 12 credits from the School of Commerce to graduate. In June 1940, he entered the Flying Cadet program, graduating in 1941 with the rank of 2nd Lieutenant. The Class 41B flying school stayed at Stockton Field in Stockton, Calif., where Dad was an instructor until 1944. In 1942, Dad was in the wedding party of a fellow classmate, John O'Neil. John's bride-to-be drove from St. Louis to Stockton with his sister, Jessie Bird O'Neil. When the girls arrived, Jessie stepped out of the car, Dad spotted her, and, 13 dates later, they were married in Stockton on Jan. 2, 1942 - the year OSU played in the Rose Bowl. With the bombing of Pearl Harbor, Dad's leave was canceled, so they spent the next three years stationed in Stockton. A beautiful baby boy, Buzz, was born during that time, in 1943. Dad was then transferred to the 2nd Air Force B-29 Bomber program. He and his crew were sent to India as the replacements for the 58th Bomber Wing. The China Burma India Theatre was closed in 1945, so Dad was sent to Tinian in the Northern Mariana Islands. From there, they bombed Japan. The Japanese surrendered, and as they were signing the surrender aboard the Battleship Missouri, Dad led B-29s in a flyover of Tokyo Bay, for which he was later reprimanded, as the cloud cover was too low. After the war, Dad, Jessie and Buzz returned to Corvallis, where Dad worked with his father in the automobile business until M.E. Woodcock & Sons closed in the 1960s. Dad tried selling insurance but didn't like it, so he went to work for O'Toole's Chevrolet until his retirement. In Corvallis, he played for a city league softball team. The field was under the bridge at the end of Fourth Street. One particular game that always brought a smile to his face was when he was playing left field. A high fly-ball was hit out to left center field; Dad ran, caught it, wheeled around and threw the ball over the head of the base runner, who was heading home, and into the catcher's glove, for a double play to end the inning. The crowd went wild. Dad was a longtime member of the Corvallis Rotary Club, and a Sigma Delta Psi athletic honorary member, where he was the second freshman in the history of OSU to qualify and become a member. He also joined Beta Theta Pi fraternity while at OSU. Dad served as the president of the Good Samaritan Hospital Foundation for 20 years. He leaves behind two daughters, Franny and Posy; a son-in-law, Steven L. Pettigrew; a son, Buzz; a daughter-in-law, JoAnne H.; three granddaughters, Allyson Marie Newton, Jennifer Ashleigh Woodcock and Michele E. Rivera; two great-granddaughters; one great-great-granddaughter; sisters Jane Corcoran of Corvallis and Cynthia Lyon of Blaine, Wash.; and a legacy of goodwill to this community. Many thanks to Benton Hospice Service, especially the two Jennys, Gary, Sharon, Elizabeth and the many other staff members who helped our dad. Donations in our father's honor can be made to the OSU Foundation, the Good Samaritan Hospital Foundation or Benton Hospice Service. A memorial service is scheduled for 4 p.m. Thursday, Sept. 3, at the First Presbyterian Church, 114 S.W. Eighth St. A reception at the Corvallis Senior Center, 2601 N.W. Tyler Ave., will follow the service.

Sixty-four years, two months and 19 days: That is how long their marriage lasted - until Mother's death three years ago, and now Dad has finally gotten his wish "to go be with Jessie." Milton Edwin "Ed" Woodcock Jr. passed away Monday,... View Obituary & Service Information

The family of Milton "Ed" Woodcock created this Life Tributes page to make it easy to share your memories.

Sixty-four years, two months and 19 days: That is how long their...