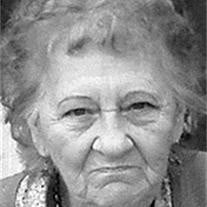 Aug. 15, 1927 - Oct. 26, 2009 Nancy Jane Bevins passed peacefully into the arms of Jesus on Oct. 26 at her youngest child's home in Corvallis. She had many loving family members and hospice to care for her, including her granddaughters Ashley Evans and Tabitha Moore. Tabitha, a sergeant in the U.S. Air Force, flew in from Missouri to be at her grandmother's side until she was peacefully at rest. She was born Aug. 15, 1927, in Coeburn, Va., to Joel and Flora Beverly. She married Joseph Bevins on Aug. 9, 1945. After Joseph completed his military duties, they moved to the Northwest to raise their family. After Joseph's death in February 1996, Nancy moved to Veneta to live next to her son and daughter-in-law, Laurrie and Margo Bevins. She had many great years with Laurrie and Margo, and they and their family included her in everything. Nancy's greatest joy was her family, which she put first and foremost her entire life. She was blessed with seven children and 37 total grandchildren and great-grandchildren, including one great-great-grandchild. Nancy had a zest for life, and loved her family very much. Because she had such a large family, she often had many options for holiday plans, and could usually wait for the best offer - which she often did. Her family well understood, and loved this about her. She was quite a character, and wasn't afraid to show it. She loved trips to the casino, See's Candy, old-time radio shows, gardening and playing the piano. She was very active in the Church of Christ of Elmira, and had many friends there, including her best friend, Mildred Carver, whom she thought of as her sister and with whom she shared her secrets - as well as an occasional ice cream sundae. She is survived by her sons, Dennis, Bill, Ronnie, Laurrie and Roger Bevins; daughters Pamma Shields and Michelle Evans; and 37 grandchildren. Services will be at 1 p.m. Friday, Oct. 30, at DeMoss-Durdan Funeral Home. Memorial contributions can be made to Benton Hospice Service.

Aug. 15, 1927 - Oct. 26, 2009 Nancy Jane Bevins passed peacefully into the arms of Jesus on Oct. 26 at her youngest child's home in Corvallis. She had many loving family members and hospice to care for her, including her granddaughters... View Obituary & Service Information

The family of Nancy Bevins created this Life Tributes page to make it easy to share your memories.