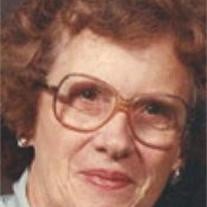 Naomi Donham Clark, 90, died on Sept. 9, 2012, in Corvallis after a short and sudden illness. She passed away peacefully, her children and family with her. Naomi was born Feb. 25, 1922, in Springerton, Ill., to Clyde Ferguson and Mary Mabel Lasater Donham. Her early years were spent in Ridgeway and Enfield, Ill. She graduated from Enfield High School in 1940. Naomi attended Chillicothe Business College in Missouri. After one year of college, Swift & Company recruited among students, and Naomi accepted a position in Chicago. In 1943, she joined her sister, Mary Evelyn, on a trip to California. Naomi stayed and worked for the Civil Service Port of Embarkation in Wilmington, Calif. It was during this time, when on a blind date, she met a U.S. Navy Chief who would become her husband, Clarence A. Clark. After accepting a proposal of marriage by letter sent from the South Pacific Arena, Clarence and Naomi made wedding plans. When the war was over, Clarence traveled by ship and Naomi traveled by land, and they met and married on July 26, 1946, in Norfolk, Va., at Epworth Methodist Church. Thus began a life of travel and frequent moves. While living in Norfolk, Clarence retired from the Navy in 1956. He accepted a position with Vinnell Company, working in Petersburg, Va. The family was preparing to move to Petersburg when Vinnell offered Clarence a position on the West Coast. Clarence moved ahead of the family and found a house, and the rest of the family arrived over Christmas in 1958. It rained every day, and for a while none was sure that it had been a good decision to move from the sunny south. Slowly, however, the beauty of the Northwest grew on each family member. Naomi loved to walk on the Oregon beaches. It almost was a weekly ritual to pack up the camper and take off for the ocean after Clarence came home from work on Friday. The family enjoyed many campfires and roasted hot dogs. Naomi and Clarence would call Corvallis their home for the rest of their lives. Both were active in Masonic organizations. Naomi was a member of the Order of the Eastern Star and Nydia Temple of the Daughters of the Nile. She volunteered for many charitable organizations and fundraisers. The family enjoyed boating and camping, and in retirement Naomi and Clarence spent many months on the road in their motor home. They enjoyed winters in sunny California and trips across the country to see family and friends. Naomi is survived by her sister, Phyllis Davis of Indianapolis, Ind.; her daughter, Connie (Wade) Schutze of Snohomish, Wash.; son, Paul (Barbara) Clark of Fort Bragg, Calif.; her grandchildren, Anna Collins, Paul Schutze, Angela Iwai, Peggy Freisinger and Pat McGrath; and great-grandchildren, Allie and Keifer Collins, Erin, Ellerie, and Philip Freisinger, and Maclean and Rebel McGrath. Naomi was buried at the Willamette National Military Cemetery with Clarence, who preceded her in death on Sept. 14, 2006. At her request, no service was held. Naomi was a member of First United Methodist Church in Corvallis. Anyone wishing to make a memorial donation in Naomi’s name can send a donation to the Shriners Children’s Hospital, 3101 S.W. Sam Jackson Park Road, Portland, OR 97239.

Naomi Donham Clark, 90, died on Sept. 9, 2012, in Corvallis after a short and sudden illness. She passed away peacefully, her children and family with her. Naomi was born Feb. 25, 1922, in Springerton, Ill., to Clyde Ferguson and Mary Mabel... View Obituary & Service Information

The family of Naomi Clark created this Life Tributes page to make it easy to share your memories.