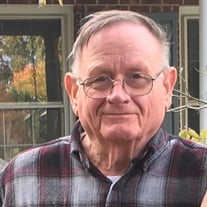 Captain Ned Osbon Shaw was born February 7, 1946 in Picayune, Mississippi. He died in his daughter’s arms on December 30, 2019 in Corvallis, Oregon. Ned was a family man and career Naval and Government worker. He married and raised his own family (daughter Christine and son Robert) in the Washington, DC area, where he resided in Clifton, Va. Ned spent his life well. Whether it be earning rank as an Eagle Scout in the Boy Scouts, piloting A6 Intruder jets for the US Navy, or raising a family - he lived fully and enjoyed himself, always making sure others did as well! He was selfless and generous, known by all who encountered him as a truly good person. He excelled on the football field and baseball diamond in his younger years and continued enjoying those sports as a spectator in his adult years. He was a diehard fan of the Washington Redskins and Washington Nationals after spending the last 40 years living near our nation’s capital. Ned also enjoyed coaching his children's soccer teams when they were young, and going fishing anytime he could get time away. After more than a decade in active duty with the US Navy, Ned later worked in procurement and logistics support of Naval aircraft at NAVAIR, a job he truly enjoyed. In reference to his time at NAVAIR, he would often tell his son, “find a job you enjoy doing and you don’t have to work a day in your life.” But he would still sneak away to go fishing, camping with the family, or to a Redskins game whenever possible! Ned also spent more than 15 years in the Naval Reserves, including time spent called to active duty during the Persian Gulf War. Eight weeks before passing we got the diagnosis of Alzheimer's-based dementia and several strokes, causing a rapid decline in his health and his eventual passing. Please remember Ned as the smiling easy-going guy who loved his family, and a good joke! Ned is preceded in death by his mother and father, Audrey and Osbon Shaw. He is survived by his daughter Christine Shaw Olsen, son Robert Osbon Shaw, sister Gaye Dawn Boyd, brother Kent Shaw, nephews Steven and David Boyd, niece Delene Boyd, and four grandchildren - Andy, Alder, Sadie, and Emmett Olsen. Ned is also survived by his former wife of over 25 years, Susan Shaw. Ned will be laid to rest in Arlington National Cemetery with full military honors; the date is to be determined. The family asks that in lieu of flowers contributions be made to an organization dedicated to Alzheimer's or stroke research and support. Hug your loved ones and always tell them you love them, as often as possible!

Captain Ned Osbon Shaw was born February 7, 1946 in Picayune, Mississippi. He died in his daughter&#8217;s arms on December 30, 2019 in Corvallis, Oregon. Ned was a family man and career Naval and Government worker. He married and raised his... View Obituary & Service Information

The family of Ned O. Shaw created this Life Tributes page to make it easy to share your memories.