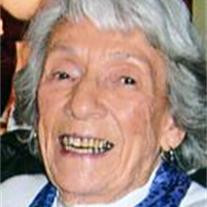 Our much-loved and gracious Mom, Grandma, Great-Grandma Nell, mother-in-law and friend, passed peacefully at home in Corvallis on May 13, 2010, following a brief but sudden illness. She was a delightful 97. Nell was born at home in Caledonia, Ontario, Canada, to George and Caroline Long Bishop, the youngest of four children. Her family later moved to Montreal, Quebec, Canada, where Nell competed her high school education with honors. She worked for the Royal Bank of Canada, and was a photographic model for major department stores in downtown Montreal prior to her marriage. After being introduced to and courted by “the boy next door” to the boardinghouse where she lived, Nell married Samuel Arthur Copperthwaite Witten (Art) on Sept. 17, 1932, in Montreal. Over their next 22 years there, they had three children, Rae, Linda and Mark, each born nearly 10 years apart. The lure of year-’round sunshine and warmth drew Nell and her family to Southern California in 1954, where she lived for 11 years in La Crescenta and 32 years in Santa Paula before moving to Oregon to be closer to her daughters. Prior to her move to Corvallis, she and Art never missed their favorite annual road trip up the California and Oregon coasts to visit family here. Nell lived a comfortable and happy 12 and a half years at Samaritan Village, where she cherished the many warm friendships she developed. During Nell’s Santa Paula years, she loved her work in nearby Ventura, in the Broadway Department Store’s china and glassware department, where she made lasting close friendships and was known for her impeccable customer service. After retiring, Nell enjoyed a number of years volunteering at Santa Paula Hospital, regularly serving meals and good cheer to patients, and was proud to be a devoted docent at the Ventura County Historical Museum until her move to Oregon at age 85. Nell was a consummate lifelong learner, always hungry for knowledge, which she absorbed through her voracious reading habits, informative television programs and careful observations of the people and the world around her. She set high standards for herself in everything she did, from her disciplined exercise routine and personal appearance (and fragrance...rarely caught without a hint of her favorite, Chanel No. 5!) to her careful nurturing of family and the many special friendships she made throughout her life. Nell not only deeply and generously loved her children, grandchildren and great-grandchildren, but thrilled some of them by sharing loop-the-loop roller coaster rides with them until she was well into her 70s. There could hardly be enough days relaxing at the seashore with family and friends; the beach and ocean influenced much of who she was. She also had a lifelong fascination and passion for carousels and carousel horses, never passing up an opportunity to ride on one of those...as she did on her 90th birthday! How fortunate her family and friends feel to have had Nell and her inspiring example in our midst for so many years! Nell was preceded in death by her son, Mark, in 1964; her devoted husband, Art, in 1990; and her three siblings, Mabel, George and Len. She is survived by her daughter, Rae Bruton of Klamath Falls; daughter and son-in-law, Linda and Steve Gallon of Corvallis; grandchildren Brian and Mike Kinzie, Kristen Gallon Schlattmann and Dave Gallon; sister-in-law, Rae Morley; nine great-grandchildren; and numerous nieces and nephews. A celebration of Nell’s life will take place at Samaritan Village at a later date. Those wishing to make a donation in her memory may do so with contributions to Benton Hospice Service, the Samaritan Village House Committee, or the Albany Historic Carousel and Museum, where the family plans to sponsor a carousel piece in Nell’s name. Contributions for the carousel piece can be sent to the museum at 503 First Ave. W., Albany, OR 97321, noting that the contribution is intended for Nell Witten’s carousel piece.

Our much-loved and gracious Mom, Grandma, Great-Grandma Nell, mother-in-law and friend, passed peacefully at home in Corvallis on May 13, 2010, following a brief but sudden illness. She was a delightful 97. Nell was born at home in Caledonia,... View Obituary & Service Information

The family of Nellie Witten created this Life Tributes page to make it easy to share your memories.