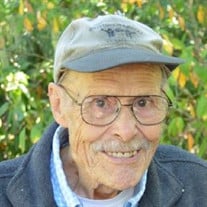 Norman Anderson died peacefully at home with his wife, Margaret, by his side on January 13, 2018. Norm was born to Herbert and Kathleen Anderson in Edam, Saskatchewan, Canada, on St. Patrick’s Day, 1933. Along with his brother Aaron and sisters, Elaine and Sallie, he spent his early childhood in a log cabin. Norm’s grandchildren loved to hear how he rode a horse to the one-room school. After the depression years, when Norm was eight, his family lost their farm, piled all their belongings, including the four children, into their pick-up truck and headed to British Columbia, where the family lived on a small dairy farm near Langley. Norm’s younger brother, Albert, was born two years later. After graduating from Langley High School, Norm attended the University of British Columbia, where he enrolled in agriculture. A summer job at Summerland Experiment Station in the Okanagan Valley introduced him to entomology, which became his major at university and a life-long passion. It was in Summerland that he met his future wife, Margaret. They were married in September 1956, and came down to Oregon State University, where Norm completed his Master’s Degree. In 1962, after receiving his Ph.D. from Imperial College, London, and becoming the father of twins, Norm returned to OSU as a faculty member in the Entomology Department. His main interest was aquatic insects, especially caddis flies. Studying the insects that live in Oregon streams and rivers was a great occupation for the father of four children. The family spent happy weekends camping and bug-hunting. Later he would share his love of small stream creatures with his nine grandchildren. Norm had a close relationship with many of his graduate students, several of whom came by to visit during these last weeks. He enjoyed and valued his association with the Stream Team and with other colleagues. One of his many projects over the years was monitoring the return of insect life to the streams on Mt. St. Helen’s after the 1980 eruption. More recently, after his retirement, he studied the insects that inhabit the temporary streams that run through their property here in North Corvallis and he continued to go up to his office almost every day. He also kept bees for over 40 years that produced what was proclaimed to be the best honey anywhere. Norm is survived by his four children, Richard Anderson (Nancy Bocek), Judith Bender (Bob), Susan Frisby (Barry) and Karen Stephenson, and also by his nine grandchildren, Casey and Jena Anderson, Alex and Chris Bender, Cameron, Connor, and Sarah Frisby, and Fiona and Gillian Stephenson. And by Margaret, his loving wife of 61 years. A Memorial Service is planned at First Presbyterian Church on Friday, January 26, at 11:00 a.m. Additional parking is available at First Baptist Church. Instead of flowers, you may make donations to Greenbelt Land Trust, Benton County Historical Society, or First Presbyterian Church. www.demossdurdan.com

Norman Anderson died peacefully at home with his wife, Margaret, by his side on January 13, 2018. Norm was born to Herbert and Kathleen Anderson in Edam, Saskatchewan, Canada, on St. Patrick&#8217;s Day, 1933. Along with his brother Aaron and... View Obituary & Service Information

The family of Norman H. Anderson created this Life Tributes page to make it easy to share your memories.

Norman Anderson died peacefully at home with his wife, Margaret,...