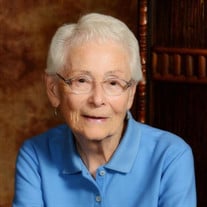 Patricia G. Phillips, age 93, died Monday, May 4, 2020, having lived independently until the last two weeks of her life. The daughter of (Daphne) Merle Oliver and Ralph Jefferson Gibbs, she was born July 20, 1926, in Eugene, Oregon. She received her early education in Milwaukie, Oregon, and graduated from Oregon State College in Corvallis in 1948 with a degree in home economics education. She returned to Oregon State in the early 1960s to earn certification in elementary education, then taught first grade at Roosevelt Elementary School. She met Wayne C. Phillips in junior high, and they were married as OSC undergrads on August 29, 1947. Pat and Wayne settled in Corvallis and raised their daughters there before moving to Marin County, California, in early 1971. They came back to Oregon in 1987, living in Bend, then Portland, before returning to Corvallis in 2006. Pat’s life passion was volunteering. She partnered with other Corvallis parents in the 1950s to establish The ARC of Benton County. In the mid-1970s she worked for the first hospice in California (the second in the United States) as its administrative assistant. She took on additional roles of educator and public speaker for the organization, helping introduce hundreds of people to the then-new hospice concept. She enjoyed family time, reading, taking daily walks, playing word games, and using her computer. Her interest in genealogy and her meticulous research (pre-World Wide Web) led her to write about multiple branches of the family. She produced several volumes, the most widely distributed of which featured her Oregon pioneer great-grandparents, Eleazar and Nancy Robbins Gilliam. She was a member of Chi Omega sorority, the P.E.O. Sisterhood, and the First Congregational Church of Corvallis. Pat was preceded in death by her first-born daughter, Cheryl Ann, in 1955, and her husband, Wayne, in 2016. She is survived by daughters Janet McKensey (wife Madelyn), Robin Donaldson, and Carol Phillips and granddaughters Arayana McKensey and Emily Donaldson Walsh (husband Tim). Also surviving are nephews Dan Phillips, Bob Phillips (wife Janet), Jeff Bolin, and Dennis Bolin. It was Pat’s hope that memorial contributions be directed to Community Outreach Inc, 865 NW Reiman St., Corvallis 97330-6177; Lumina Hospice, 720 SW 4th St, Corvallis OR 97333-4426; or First Congregational Church of Corvallis, 4515 SW West Hills Rd, Corvallis OR 97333-3999. At her request, there will be a private celebration of her life. Please share your thoughts and memories for the family at www.demossdurdan.com

Patricia G. Phillips, age 93, died Monday, May 4, 2020, having lived independently until the last two weeks of her life. The daughter of (Daphne) Merle Oliver and Ralph Jefferson Gibbs, she was born July 20, 1926, in Eugene, Oregon. She received... View Obituary & Service Information

The family of Patricia G. (Pat) Phillips created this Life Tributes page to make it easy to share your memories.