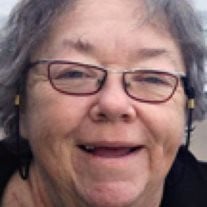 Sept. 18, 1950 — March 26, 2014 Patricia M. (Welsh) Shallow of Corvallis, formerly of Dubuque, Iowa; Iowa City, Iowa; Bettendorf, Iowa; Ridgefield, Wash.; and Great Falls, Mont., passed away on March 26 at home, after a short battle with cancer. She was born Sept. 18, 1950, in Dubuque, daughter of Clement H. and Rita (Clancy) Welsh. Trish graduated from Wahlert High School in 1968; Scott Community College, Davenport, Iowa, in 1972; and St. Ambrose College, Davenport, in 1989. She married Steven C. Shallow of Bothell, Wash., on May 18, 1974, at St. Patrick’s Catholic Church in Dubuque. Trish was the chief tax deputy for Benton County. She enjoyed spending time with Steve and their children and grandchildren. She loved camping in Montana and along the Oregon Coast. The trips to the coast would include stops at the casinos. Her family and friends were benefactors of wonderful baking. Trish had a heart for those less fortunate, and she and Steve were supporters of the local food pantry. Survivors include her husband of 40 years, Steven C. Shallow; her children, Erin (Bob) Grant of Huntington Beach, Calif., and Devin (Senda) Shallow of Lakewood, Colo.; her grandchildren, Matilda and Milo Grant of Huntington Beach, and Alexander Shallow of Lakewood; her siblings, Mary Welsh of Warrenville, Ill., Daniel (Nora) Welsh of Knoxville, Tenn., Tim (Tracey) Welsh of Santa Clara, Utah, and Kevin Welsh of Dubuque; sisters-in-law Diann Welsh of Sycamore, Ill., Nancy (Mike) Wagner of Oregon, Wis., Linda (John) Gillen of Round Rock, Texas, and Cathy Shallow of Olympia, Wash.; and numerous nieces, nephews and cousins. She was preceded in death by her parents; and her brothers Michael Welsh and Dennis Welsh. In lieu of flowers, donations can be made to: • Benton Hospice Service, 2350 N.W. Professional Drive, Corvallis, OR 97330; or • South Corvallis Food Pantry, 1798 S.W. Third St., Corvallis, OR 97333. Some words of wisdom that Trish shared in her final days: “I guess what really matters is how much of yourself you leave with others. I’ve left myself with more people than I realized.” “I didn’t realize how much those little things mean. You always wonder what you can do, but being on this side, I see that every letter, card, knit hat, smile means so much. Be kind. So many people touch me now.”

The family of Patricia M. Shallow created this Life Tributes page to make it easy to share your memories.