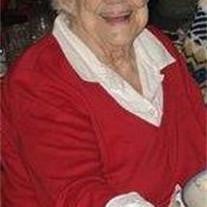 Pauline F. Locke July 6, 1923 — June 15, 2012 Pauline Francis Locke went home to be with her Savior on June 15, 2012. Polly was born July 6, 1923, in Corvallis to Paul and Dorothy Decker. She attended Beaver Creek Grade School, a one-room schoolhouse in Corvallis, and graduated in 1941 from Corvallis High School. After graduation, Polly worked as a welder in the shipyards in Salem. She married Lewis Locke in July of 1945. After their wedding, they moved to Colorado for two years to work in road construction. They returned to the Philomath area, where they owned and operated a gas station. Polly loved and took care of children as a foster care mother in the 1950s. In 1959, they welcomed their daughter, Rebecca, into their home. Polly was a cook for the Corvallis School District for 10 years, and operated her own child care business for 20 years. After retirement, she volunteered for the food bank and the Gleaners. For 10 years, she was a member of First Baptist Church in Corvallis, where she enjoyed cooking for retreats. Later, she became a member of the Philomath Church of the Nazarene, and served as treasurer and missionary president. She was preceded in death by her husband in 1997, and her brother Floyd in 1945. She is survived by her daughter and son-in-law Ron and Becky Schaefer of Boring. She is also survived by her grandchildren, Aaron and Kate Schaefer, Luke and Sarah Harris, Drew and Toni Schaefer, Mark Schaefer and Ally Schaefer. A graveside service will take place at 1 p.m. Friday, June 22, at Oaklawn Memorial Park, followed by a 2 p.m. fellowship time at Philomath Church of the Nazarene, 1947 College St. The memorial service will follow at 3 p.m. at the church. In lieu of flowers, please donate to the Locke Scholarship Fund, Benton Foundation for Philomath High School.

The family of Pauline Locke created this Life Tributes page to make it easy to share your memories.