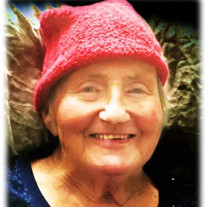 Peggy’s Last Peaceful Protest On January 22, 2019, after 53 days of hospitalization and attempts at rehab, Peggy finally protested the multitude of bitter pills, the constant repositioning, the breathing machines, the hollow needles. She let the nurse know she worried she would disappoint her children, protesting curative care. We assured Mom we just wanted her to be good with her own decisions. Lincoln once said that “in the end it’s not the years in the life but the life in the years.” And Mom asked for hospice. Peggy still brought smiles and laughs to her caregivers during these last days. A nurse asked her if she would like a transport that day to Evergreen Hospice in Albany, Peggy replied “Well, I can’t hike there.” It was her day to call the shots, and that night she wanted a Block 15 “Sticky Hands” in her hand. The morning of January 22, holding the hands of her daughters, Peggy’s spirit took that last hike to those she so dearly missed in her life: Patrice Christine Fletcher (her 4th child a beautiful and feisty soul gone too soon at the age of 18); Michael Philpott (close family friend, Peggy’s son’s best friend, also gone too soon while serving in the Army Rangers); Catherine (Kay) Brigham (Peggy’s brave younger sister who fought a long battle with Multiple Sclerosis and also passed early); Lee Ascough (Peggy’s father a kind, gentle, quiet but witty man); Timothy Smith (Peggy’s partner and love of her life, mischievous with a big heart); Madge E. Ascough (Peggy’s spirited, matriarchal mother); Eddie Wohlstattar (her sweet, talented son-in-law, loving husband to Peggy’s youngest daughter, and father of Peggy’s 2 beautiful granddaughters); Stanley Lee Ascough (her caring younger brother). A gathering to envy. Peggy Louise Ascough was born in Los Angeles in 1934, the first in four children born to Madge and Lee, followed by Stan, Kay, and Barbara. She attended the all-girls Catholic School Immaculate Heart, both high school and college. She earned her B.S. in Biological Science and Chemistry. She married David Fletcher, and after 7 years, 5 children, and 5 moves, Peggy left her abusive husband, moving with children into her parents’ home, and started working full time. Peggy worked both in clinical and research at a small county hospital named John Wesley. Wesley’s medical oncology moved to "County General" at Los Angeles County - University of Southern California Medical Center, where she ran a stat lab for the Oncology Infusion Unit. Peggy’s work for 34 years as a clinical laboratory scientist allowed her children tuition remission for degrees at USC. Between 1990 a and 1999, Peggy worked a second job at Kaiser Permanente. In the year 2000, after Peggy’s mother Madge died, Peggy retired and moved to Oregon to be closer to her children and grandchildren. In her years in Oregon, Peggy participated in many peaceful protests, an active member of many political groups, but her heart was always with the Raging Grannies. Peggy leaves behind many family and friends who all loved her dearly, who best remember her smiles and love for dancing. A celebration of Peggy’s life will be held at Squirrel’s Tavern on 2nd and Monroe, Corvallis Oregon, at 2 pm February 24th

The family of Peggy Fletcher created this Life Tributes page to make it easy to share your memories.