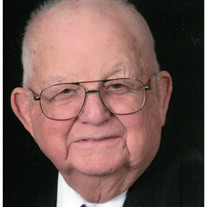 Quitman Earon "Mac" McKee left this earth to go be with Jesus and his "Sweetie' on August 28, 2018. He died at Regency Park Place in Corvallis after a decline in health since his wife, Veda, had passes away in February. He was 93 years old. Mac was born on June 13, 1925 in Moxie, Arkansas. He left Arkansas on a train to California a soon as he came of age. He enjoyed working on the Los Angeles trolley system as one of his first jobs in California. Mac met the love of his life while working at the Norwalk La Mirada School District and married for a second time on August 13, 1966.. It was a marriage that would last 53 years. Mac had three daughters by his previous marriage, Sue, Glenda, and Charlotte and he was liked a father to Veda's two daughters, Kathy and Carol. When Mac and Veda retired from their jobs in California, they moved to Wren, Oregon. Mac wasn't retired for long when he took a job as an electrician for the Corvallis School District. He loved model trains, traveling, and browsing for antiques. A devout Christian, Mac was a fine human and a role model to all who knew him. He was a warm and welcoming person and was always willing to lend a helping hand. In his last couple of years his friendly disposition lifted the spirits of residents and staff at Park Place. Mac is missed everyday and he was beloved by his family and friends. He is survived by his daughters Sue Frederickson (Terry) of Arizona and Charlotte De lucco (Robert) of Lake Oswego; Veda's daughters, Kathy Powell (Tom) and Carol Neelands of Albany; many grandchildren nd great-grandchildren; and his dear friends. Mac was preceded in death bu his wife, Veda McKee and daughter, Glenda Heinsma. A memorial service will be held at 1:30 pm on Saturday, March 9, 2019 at Circle Church of Christ, 2020 NW Circle Blvd, Corvallis. in Lieu opf flowers the family asks that donations be made in his name to Heartland Humane Society, 398 SW Twin Oaks Circle,, Corvallis, OR, 97333

Quitman Earon "Mac" McKee left this earth to go be with Jesus and his "Sweetie' on August 28, 2018. He died at Regency Park Place in Corvallis after a decline in health since his wife, Veda, had passes away in February. He was 93 years old.... View Obituary & Service Information

The family of Quitman McKee created this Life Tributes page to make it easy to share your memories.

Quitman Earon &quot;Mac&quot; McKee left this earth to go be with Jesus...