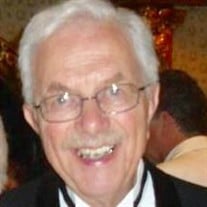 Ralph William Gazeley, 88, joined the Lord Monday, June 5, 2017 at home in Corvallis. Born in Portland on July 6, 1928, he graduated from Roosevelt High School in 1946. After high school, he joined the Army, serving in Japan. He attended the University of Oregon and was a member of Delta Tau Delta fraternity. He graduated with a Bachelor’s degree in business in 1952. In 1954, Ralph married Marian Kruse of Coos Bay. They lived in San Mateo, California before settling in Coos Bay to raise their family. The couple retired to Bend, enjoying the sunshine of Central Oregon. They have lived in Corvallis since 2001. Ralph taught various subjects at North Bend High School for thirty years. He served in the Episcopal Church in many capacities and was on the board of directors of Security Bank (later Umpqua Bank) for 12 years. Barbershop singing was Ralph’s passion. He was a member of the Barbershop Harmony Society for 63 years and a charter member of Barbershop Choruses in Bend, Coos Bay and Corvallis. He will be remembered for his devotion to family and his love of singing. Ralph is survived by his wife Marian; sons, William, of Corvallis, David (Danielle) of Valley City, North Dakota, and Steven,(Maggie) of Wilsonville; six grandchildren; Piper, Trevor, Guy, Portia, Elizabeth, and Shanelle; brothers, Marcus of Bellevue Washington and Herbert of Walterville, Oregon; and sister, Carolyn MacDonald of Napaville, Washington. Preceded in death by daughter-in-law, Kristine. Family and friends are invited to Ralph's memorial service on Sunday, June 11, 2017, 2:00 pm at Good Samaritan Episcopal Church, 333 NW 35th Street, Corvallis. In lieu of flowers, please donate to the Barbershop Harmony Society. Checks can be made out to the “Harmony Foundation,” 110 7th Avenue N. Suite 200, Nashville, Tennessee, 37203. Please include “in memory of Ralph Gazeley” in the memo.

Ralph William Gazeley, 88, joined the Lord Monday, June 5, 2017 at home in Corvallis. Born in Portland on July 6, 1928, he graduated from Roosevelt High School in 1946. After high school, he joined the Army, serving in Japan. He attended... View Obituary & Service Information

The family of Ralph William Gazeley created this Life Tributes page to make it easy to share your memories.