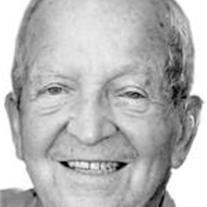 Ralph James Grieve of Corvallis, son of Archie and Clara Grieve, passed away of heart failure on Dec. 13, 2010, at the age of 88. Ralph was born Feb. 23, 1922, in Ayr Township, Cass County, N.D., and grew up on farms around Buffalo, N.D. He graduated from Buffalo High School in 1941, and was working at the Lockheed Martin aircraft factory in Los Angeles, Calif., when Pearl Harbor was attacked. He enlisted in the U.S. Navy and served until the end of the war, helping train Naval Aviators. He married Mary Jane Pavlik on Sept. 3, 1943, and had three children: David James (Judy) of Clarks Hill, S.C., Diane Jill Thomas (Gary) of Waitsburg, Wash., and Linda Marie West (Jim) of Beaverton. Ralph earned an education degree from the University of North Dakota in 1950 while being supported by Mary Jane (who had earlier graduated and was teaching) and his Uncle Sam. Leaving the balmy state of North Dakota, the family sought greener pastures in Oregon. Ralph taught school in Bly, Columbia City, St. Helens and Corvallis (1962 to 1982). In addition, he taught school in Guam; Argentia, Newfoundland; and Subic Bay, Philippines. He received a master's degree in education from Oregon State University in 1959. After retiring from the Corvallis school system in 1982, Ralph enjoyed gardening, hiking and travelling. During their golden years, Ralph and Mary Jane traveled extensively within the United States and to Micronesia, Samoa, Australia, New Zealand, Thailand, Europe, Turkey, Mexico and Jamaica. Ralph is survived by his wife; children; eight grandchildren; and eight great-grandchildren (with two more about to enter this world). He is also survived by his sisters Ellen Stenseth (Casselton, N.D.), and Shirley Solheim (Milaca, Minn.), and his brother, Richard Grieve (Buffalo). He was preceded in death by his sister Doris Ellenson of Detroit Lakes, Minn.

The family of Ralph Grieve created this Life Tributes page to make it easy to share your memories.