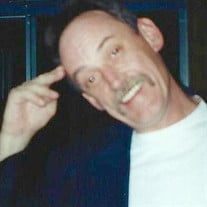 Feb. 15, 1956 – March 28, 2015 Randy Patterson unexpectedly died, apparently of a heart attack, on March 28, 2015, at his residence in Albany. He was 59. Randy was born on Feb. 15, 1956, at Good Samaritan Hospital in Corvallis, to Lucy Shroyer Patterson and James “Jimmy” Patterson. His grandparents were Helen and George Shroyer, and Jessie May Patterson Clark and Wright V. Clark. Randy was a lifelong resident of the Corvallis, Philomath and Albany area. He was a member of the Lutheran Church. As a teenager, Randy spent his summers working for his Shroyer grandparents, doing whatever was necessary…feeding cattle, baling hay, building fence, operating and hauling equipment, fighting fire. Family hobbies were horses and motorcycles. Randy became an accomplished and award-winning motocross rider, winning many trophies at the Oregon tracks. Randy loved driving trucks and operating equipment of all kinds. He obtained his first trucking job while still a teenager. Later he hauled logs for his uncle, Charlie Hall, who owned a trucking company. He also drove long haul for Maks Wood Products and for States Industries, and made many cross-country trips in all kinds of weather conditions. Randy enjoyed reading and watching movies. He loved music and dancing, and was a regular at karaoke. He twice traveled to the Dominican Republic. He talked about retiring somewhere sunny where he could work on his tan and have fun. Randy moved in with his dad in 2012 and they shared memories of their truck-driving days. As Jimmy’s health worsened, Randy became his dad’s caregiver until Jimmy moved into an assisted-living facility in March. Randy was preceded in death by his son, Spc. Cody James Patterson, who was killed on Oct. 6, 2013, in Afghanistan. Randy is survived by his children Nicole Patterson, Letitia Williams, Elijah Williams and Taylor Patterson; grandchildren, Dylan Mendell, Asia Minor, Kaden Leatherman, Chloe Dustman and Tristan Williams; his father, James “Jimmy” Patterson; his mother and stepfather, Lucy and John Leach; sisters Lori Anderson and Kim Holt; brother Jeffrey Patterson; and a large extended family. Randy thought of death as “the next big adventure.” He wanted a big party and no sadness. His celebration of life on April 3 at the Philomath Scout Lodge drew a crowd. Major Brian Koyn, chaplain of the 75th Ranger Regiment, who had officiated at Cody’s funeral, officiated at Randy’s celebration of life, and recalled helping Randy prepare Cody’s eulogy. A memorial service will take place at 3 p.m. Sunday, April 12, at Peace Lutheran Church, 2540 Applegate St. in Philomath. The public is invited. Remembrances can be made to the Cody James Patterson Memorial Scholarship Fund that Randy established, administered through Philomath Community Services, P.O. Box 1334, Philomath, OR 97370.

The family of Randall Lee Patterson created this Life Tributes page to make it easy to share your memories.