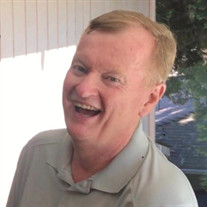 Raymond Humphreys - a longtime Corvallis resident who was a joy to everyone who knew him - passed away on January 29, 2021 after a brief but courageous battle with cancer. Born on August 13, 1958, Ray was the sixth of seven children born to William and Marne Humphreys of Reedsport, Oregon. Ray graduated from Reedsport High School in 1976, where he was an academic star and competed on the golf team. He also attended the University of Washington, where he found many lifelong friends and a love of Husky football, much to the dismay of his Duck- and Beaver-cheering family. For the past 22 years, Ray worked for Stahlbush Island Farms as a Production Data Technician, where he was known for his kindness and humor. In honor of Ray, Stahlbush owner Bill Chambers will be building a memorial bench - complete with one of Ray’s golf clubs - at the company’s headquarters. A devoted and talented gamer, Ray was among the first to master Pac-Man in the early days of the ‘80s video game craze and in recent years was a legendary - yet anonymous - figure in the World of Warcraft universe. His greatest joy, however, was family, particularly his many nieces and nephews. Known universally - even by those who weren’t necessarily related - as “Uncle Ray,” he left an indelible impression on the lives of two generations and more than 50 years of his siblings’ children, as both an admirable inspiration and a bad influence (in the best way). As young kids, the girls in the family saw Ray as a jungle gym, great for climbing and jumping on, while the boys were frequent victims of the “Why are you hitting yourself?” game. He was the first person most of the cousins went to a bar with and learned to play pool from, and on special occasions, they were treated to a karaoke rendition of “Masquerade.” On at least one occasion, he was the reason a nephew had his mouth washed out with soap. A generous spirit who always took an interest in the lives of his family, he was a regular fixture at the kids’ sporting events and - when he couldn’t attend - would follow their athletic exploits in the local paper. His observant, intelligent, ridiculous humor was a highlight of family gatherings, as were the ever-present board games where he preached to everyone that “you have to play the player.” Thanks to him, the Humphreys family is populated with people who will interrupt any conversation with a movie quote or a song lyric, and greet each other with “‘Sup Homes?” And even though his nieces and nephews number in the dozens, he shared something special with each of them. He recalled their high school friends and knew their favorite TV shows. He was a groomsman in their weddings and celebrated their birthdays. He listened and remembered and made them laugh. And most recently, he got to know his newest niece Charlotte via FaceTime. As much as he loved his family, however, he hated long goodbyes or a fuss being made over him - and was renowned for sneaking away from a gathering unnoticed. With that in mind, it’s only fitting that he made his final exit when hospital visitors were limited. Ray being Ray, he was cracking jokes and making nurses laugh right up until the very end. Ray was preceded in death by his father Bill Sr., his mother Marne, and his brother Bob. He is survived by sisters Mary Kroll and Mag Myers (Dean), brothers Bill (Donna), Jim (Martha), Paul (Debbie), and sister-in-law Delaine Nored (Dick), as well as more than two dozen adoring nieces and nephews. In lieu of flowers, please make donations to to the Forest Hills Country Club’s Youth Golf Programs in Reedsport, Oregon. As summed up by his niece Kim in a single word - Ray was “goodness.” Birthdays, graduations, weddings, and holidays - particularly Thanksgiving, when he would dependably show up with an ungodly amount of soda - will never be the same. Those who loved him, however, should be comforted by the thought that he’s now playing a round of golf somewhere with his dad, brother, and brother-in-law, laughing his great laugh, and no doubt happily “gankin’ some noobs” online.

Raymond Humphreys - a longtime Corvallis resident who was a joy to everyone who knew him - passed away on January 29, 2021 after a brief but courageous battle with cancer. Born on August 13, 1958, Ray was the sixth of seven children born to... View Obituary & Service Information

The family of Raymond T. Humphreys created this Life Tributes page to make it easy to share your memories.

Raymond Humphreys - a longtime Corvallis resident who was a joy...