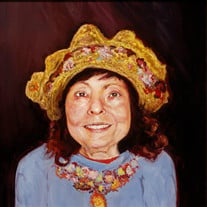 Regina Berman Born 8/4/1939 at a Manhattan hospital. Spent 23 years in Queens growing up, going to school, and finally going to work. First marriage to Joel Rothstein on January 6, 1963, and settled in Brooklyn. Started to paint and appreciate art. Loved spending days at the Metropolitan Museum of Art. By the time she turned thirty, she and Joel adopted two boys from birth. As time wore on, she and Joel divorced after 14 years of marriage, but after awhile, remained friends. David the youngest son married and Regina became a Grandmother and a Great Grandmother. In 1982, she and Herbert Berman were married. During that time, Regina became a nurse, and worked in two hospitals before moving to Oregon after second marriage failed. Steven, the older son had moved out prior, and after visiting him in Oregon, wanted to follow him, which she did in 1993. Upon moving to Oregon, Regina became active in the community theater at the majestic theater in Corvallis. She did everything from ushering, props, acting, and voice couch to give people a New York accent. Her favorite role was Yenta in Fiddler on the Roof. She really loved the theater. Being an only child, Regina brought out her father to Oregon later that year. Her mother had died four years prior. Herbert and Regina remained friends, and after visiting, moved to Oregon in 1996. Third time was the charm, and the relationship was solid. Joel Rothstein moved out to be near Steven in 1997. Steven and his wife, Liesl, live on a farm in Kings Valley with their two sons Cian, 11, and Jovion 7 years of age. Regina often said that this was the best time of her life. She is survived by Steven, Liesl, Cian and Jovion. In New York she is survived by her son, David, his wife, Catherine; grand-daughters, Krystina and Alexandria, and Great Grand Grand-daughter, Kaylee Lynn. The family wishes to thank Benton Hospice where Regina volunteered for ten years. Also to thank Corvallis Caring Place for her care. She leaves cousins, and many friends that she held dear. Keep the faith.

Regina Berman Born 8/4/1939 at a Manhattan hospital. Spent 23 years in Queens growing up, going to school, and finally going to work. First marriage to Joel Rothstein on January 6, 1963, and settled in Brooklyn. Started to paint and appreciate... View Obituary & Service Information

The family of Regina F. Berman created this Life Tributes page to make it easy to share your memories.