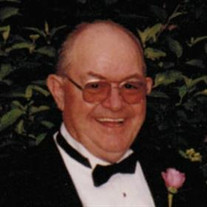 Richard Joseph Brockamp was born in Watsonville, CA on August 14, 1931, the only one of his siblings who was born in a hospital because his mother had another ailment was already in the hospital. Rich still had the receipt for the hospital bill, $25.00. One of the charges was for the baby’s laundry, $0.35. At age three, the family moved to Oregon, settling in Mt. Angel, OR. Richard attended the parish school; the first three grades were taught by Nuns. He went to Mt. angel Prep School taught by the priests at the Benedictine Abbey. He played on the football team as a freshman and sophomore, and boxed in the smokers, but dropped out of school to work on the Abbey farm to earn money for the family. He learned to recite poetry and was very good at “The Cremation of Sam McGee” by Robert W. Service, “Reincarnation” by Wallace McRae, and “That Ten Cent Can of Paint”. He entertained many people throughout his life. He was really good at telling and remembering jokes, and kept them fairly clean. In 1948, he met his future bride, Catherine (Casey) Duman and they were married in Mt. Angel on Nov. 4, 1950. He was still working for the Mt. Angel Abbey Farms and they rented a house out for $25.00. In 1951, his father-in-law loaned him $3500.00 for a down payment on a 45 acre place in Mulino, OR on the Banks of the Molalla River. There he worked in the woods and drove log trucks, until the fateful day when Uncle Sam asked him to go fight the war in Korea. He was gone for nearly 2 years but earned the means to go to Barber school on the G.I. Bill. He started barbering in Molalla in 1956 and eventually bought a shop in Corvallis in 1960. The little shop is now a sandwich shop on Second Street. In 1973, he became the custodian at St. Mary’s church and school in Corvallis, a job that went 20 years, with retirement in 1993. He bought a 5th wheel trailer a, a good pickup and travelled all over the 10 westerns states plus some of Canada, camping and following some roads until they petered out. He took a weekend every year to go to his brothers law ranch in Idaho and round up cattle. Rich also worked for the Bureau of Land Management as Camp Host, led tours at Fort Stevans, and did janitorial work. One boss in Arizona said, “I can’t believe I just hired a 75 year –old man to do the job.” He was a 58 year member of the Knights of Columbus, flipping many a pancake for their charity breakfasts. He also served as Grand Knight and Faithful Navigator in the 4th degree Knights. In 1965 he bought a farm on the Alsea Highway, where he raised his family, calves and trees, commuting 10 miles every day to Corvallis for work. He was a lifetime member of the V.F.W., joining in Molalla. Rich is survived by his wife, Casey, children, Sandra Morrison, Daniel Brokamp, Raven Wing Hughes, and Jaime Brockamp, 12 grandchildren, 9 great-grandchildren, brother, John, many friends, nieces and nephews. He is preceded in death by his parents, Harry and Ida, two sisters and one brother. Family and friends are invited to a Memorial Mass, 11:00 am, Tuesday, July 24, 2018 at St. Mary’s Catholic Church, 501 NW 25th Street, Corvallis. In lieu of flowers, donations may be made to St. Vincent DePaul. Please share your thoughts and memories for the family at www.demossdurdan.com

Richard Joseph Brockamp was born in Watsonville, CA on August 14, 1931, the only one of his siblings who was born in a hospital because his mother had another ailment was already in the hospital. Rich still had the receipt for the hospital bill,... View Obituary & Service Information

The family of Richard "Rich" Brockamp created this Life Tributes page to make it easy to share your memories.

Richard Joseph Brockamp was born in Watsonville, CA on August...