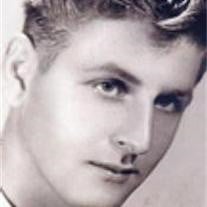 April 2, 1947 — Dec. 19, 2012 Rick Jobe died Dec. 19, 2012, at his home in Philomath. He was born April 2, 1947, in Haleyville, Ala. During his life he lived in many different states, moving to Oregon for the first time when he was in the second grade. He loved his country and joined the U.S. Army in July 1964. He served in Vietnam as a paratrooper, attached to the Special Forces. He was honorably discharged in June 1967. He held several different jobs during his life, but for the majority of it he was a long-haul truck driver, a job that he loved. He and his buddy, Lee Sherrill, established Sherrill and Jobe Trucking Inc. in 1995, and he and his wife operated Rick Jobe Trucking Inc. from 2010 until September 2012. He married Donna Gee on Oct. 28, 1996, in Reno, Nev. The couple lived in Corvallis until 2002, when they moved to Tangent. Last month they moved to Philomath. Rick had a great love for his family, and his favorite activity was camping with family and friends, especially at Sunnyside Campground on Foster Lake. Besides his wife, survivors include his children, Don and Tracy Jobe of Bend, Teresa and Gregg Kissler of Redmond, Rick Jr. and Heather Jobe of Tillamook, Angela Corbera of Rio Dell, Calif., and Tracie Michelle Barker of Crescent City, Calif.; his sisters Carolyn Wismer of Tillamook and Nelda Knight of Hartselle, Ala.; stepchildren Rick and Deby Sutter of Kennewick, Wash., Rob Sutter and Jim Griffin of Philomath, and Russ and Karen Sutter of Vancouver, Wash.; 16 grandchildren; five great-grandchildren; and his best friend since second grade, Lee Sherrill of Philomath. No immediate services are planned. Memorial contributions can be made to Benton Hospice Service in care of DeMoss-Durdan Funeral Home.

The family of Richard Dwight Jobe created this Life Tributes page to make it easy to share your memories.