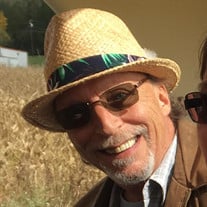 "Sometimes we live no particular way but our own" - Grateful Dead, Eyes of the World Richard Lewis Farley, born March 9, 1951 in Portland, Oregon, lived his life doing his own thing each and every day. He was passionate about justice and standing up for what he believed in, something that manifested in his youthful political protests and his outrage about the wrongs in the world, even until his very last days. He taught that same lesson to his daughter when she was just a child, giving her a button emblazoned with the words "Silence is approval" when she was only in elementary school. After leaving Portland in the 70s, he spent time in California building swimming pools and following the Grateful Dead before settling down in Corvallis a few years later. It was there that he met his wife Debbie, who he married on November 23, 1979. They spent almost every single day together over the next 37 years: raising their daughter, Amy, taking trips to the coast, frequenting garage and estate sales, doing hours of yard work and feeding the birds and hummingbirds that made their backyard home, and snuggling up in front of the TV. After he retired and Debbie started working from home, he made her lunch every day, and they could still be spotted holding hands, even after 40 years. Throughout his life, he went by many important names that captured how much he was loved: Ricky to his parents, Ben and Lou Farley, and his three little sisters, Janyce, Jackie, and Kristi; Mr. Farley to the hundreds of students that loved him for the 20+ years that he worked at Jefferson Elementary; Rick to his friends and colleagues, who shared many afternoons chatting with him about politics and music; and Uncle Rick to his extended family, including lots of nieces and nephews both small and grown. He was husband and best friend to Debbie; Daddums to Amy, who he challenged to stand up for what is right and always, always allowed to be herself; and father-in-law to Peter, who shared his love of music and playful antics (usually aimed at Amy and Debbie). Most recently, in 2015 he became Grandpa and Grandpere to Michael, the newest little person to make his eyes sparkle and smile. Rick passed away on March 14, 2017, in his home with his family. While cancer snatched him away too soon, he remained himself until the end - watching the Daily Show and complaining about Trump, laughing about some new video on YouTube, and doing exactly what he wanted to do, spending time at home with the people he loved. His family is holding an informal open house to celebrate his life at Fire Station #5's Walnut Room (4950 NW Fair Oaks Dr., Corvallis) from 2:00 to 4:00 p.m. on Saturday, March 18; they ask guests to wear Hawaiian or tie-dyed shirts in Rick's honor (fedora hats optional), and urge people to donate to Samaritan Evergreen Hospice or a charity of their choice instead of bringing flowers. As the Grateful Dead sang, "What a long, strange trip it's been..." Please share your thoughts and memories for the family at www.demossdurdan.com

"Sometimes we live no particular way but our own" - Grateful Dead, Eyes of the World Richard Lewis Farley, born March 9, 1951 in Portland, Oregon, lived his life doing his own thing each and every day. He was passionate about justice and... View Obituary & Service Information

The family of Richard L. Farley created this Life Tributes page to make it easy to share your memories.

&quot;Sometimes we live no particular way but our own&quot; - Grateful...