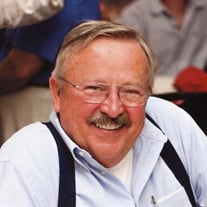 Living with hope and dying with confidence that Jesus’ promises are true, Dick is now seeing his Lord face-to-face. He peacefully changed his address from earth to heaven on Tuesday, October 4, 2016 (age 84) at Albany Samaritan Evergreen Hospice House, with his family by his side. Dick was born August 6, 1932, in Eugene, OR to Lou and Adelle Greenwood. Because his father’s job required frequent moves, Dick attended 13 schools before graduating from Corvallis High School in 1951. After beginning his freshman year at Oregon State College (OSU) and yet knowing the Korean Conflict was raging, he enlisted in the US Air Force in March, 1952. He was stationed in Enid, OK, Vance Air Force Base. Dick married Cornelia Ann Oetjen in Corvallis later in 1952. Four children were born into their family: Daniel Louis, Rosalie Marie, Mark Eugene and Loralei Ann. They divorced in 1967. After his military discharge, Dick returned to OSC, graduating with a B.S. in Business in 1959. He then worked in public accounting and the IRS in Arizona, and First National Bank in Portland, OR. In 1968, Dick married Teresa Marie Chesney in Portland, OR. They returned to Corvallis, where they completed their family with the birth of Derrick Arthur. Dick then began his 22-year career with the Oregon State System of Higher Education and OSU, serving in many administrative positions before retiring in 1991 as Director of Business Affairs. His many interests included: hunting, camping/RV-ing, sailing, ham-radio, riding his BMW and building/flying his ultra-light airplane. Family times were always a joy. He is survived by his wife, 5 children and their spouses, 24 grandchildren and 18 great-grandchildren; and brother, Robert A Greenwood and sister, R Sharon Latta. Being a private and practical man, Dick asked that no public service be held. The family will hold a private celebration to honor him. Those, also, wishing to honor him might consider a contribution to bless the living. Among Dick’s favorites were: Willamette Community Church, Samaritan’s Purse, Wycliffe Bible Society, American Center for Law & Justice, Albany Helping Hands; and dear to our hearts, Samaritan Evergreen Hospice

Living with hope and dying with confidence that Jesus&#8217; promises are true, Dick is now seeing his Lord face-to-face. He peacefully changed his address from earth to heaven on Tuesday, October 4, 2016 (age 84) at Albany Samaritan Evergreen... View Obituary & Service Information

The family of Richard Carl Greenwood created this Life Tributes page to make it easy to share your memories.

Living with hope and dying with confidence that Jesus’ promises...