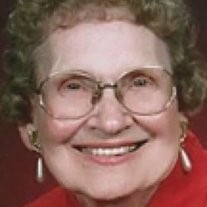 DEATH NOTICE: July 4, 1923 — Dec. 9, 2013 Rita McCaleb, 90, of Lebanon peacefully passed away on Monday, Dec. 9, at Samaritan Lebanon Community Hospital, after a short illness. Rita was born in St. Johnsbury, Vt., the eldest of six children. Raised in a farming community, she later moved to Concord, N.H., and then Portsmouth, N.H. While living in Portsmouth, she met Charles E. McCaleb of the U.S. Navy, whom she married on June 17, 1944. During Charles’ 20-year career in the Navy’s Submarine Service, he and Rita were stationed in locations such as Key West, Fla.; San Diego, Calif.; and New London, Conn. Charles was honorably discharged from the Navy in 1957, after which he and Rita relocated to Corvallis. They subsequently lived in Hermiston and in Tooele, Utah, until their retirement in 1981. They traveled the United States, visiting friends and family, for nine years before eventually settling in Lebanon in 1990. Rita was a member of the Southside Church of Christ, and did volunteer work for seniors at both the church and Samaritan Lebanon Community Hospital. Rita was preceded in death by Charles, her husband of 50 years, in 1993. Rita is survived by her sons and their wives, John F. and Missy McCaleb of Redmond, and Michael C. and Suzanne McCaleb of Springfield; granddaughter Joanna F. McCaleb of New Britton, Conn.; grandson Andrew D. McCaleb and wife Aga of Warsaw, Poland; great-granddaughter, Kasia W. McCaleb of Warsaw; grandson Daniel Thomas of Medford; granddaughter Michelle Thomas of Eugene; 17 nieces and nephews; and many loving friends and neighbors. Rita was loved by all who knew her. A memorial service will take place at 1 p.m. Wednesday, Dec. 18, at Southside Church of Christ, 196 Airport Road, Lebanon.

The family of Rita Genevieve Mc Caleb created this Life Tributes page to make it easy to share your memories.