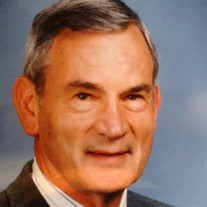 ROBERT R. ADAMS Robert “Bob” Adams died peacefully at home on July 30, 2016, surrounded by his family. He was 91 years old. Bob was born in Corvallis in 1924 to Russel and Lela Adams. He graduated with honors from Corvallis High School in 1942. From 1943-1946 Bob served in the Navy as Ensign on the USS General Leroy Eltinge in the American, Atlantic and Pacific Theatres. He earned the Victory medal. Bob received bachelor’s degrees in mechanical engineering from the University of Colorado in 1945 and in civil engineering from Oregon State University in 1948. He earned a master’s degree in engineering from Yale University in 1949. Bob was a member of the Sigma Phi Epsilon fraternity as well as many honorary societies. In 1949 Bob married the love of his life, Mary, and their exceptional marriage proved to be an inspiration for their two children, Kathryn and Susan, and for other family members and friends. Beginning in 1949, Bob spent his professional career working for CH2M (now CH2M/Hill). His positions included Resident Engineer, Project Engineer, Partner, Corvallis Regional Manager and Director of Civil Engineering. He was responsible for all projects involving structural, architectural and geotechnical engineering, port and ocean engineering, land transportation, airports, and fisheries. He then served as Vice President and Senior Consultant for the firm’s 21 regional and 12 project offices until retirement in 1988. Bob was honored as Oregon Civil Engineer of the Year by the American Society of Civil Engineers in 1978 and as a member of the OSU College of Engineering Hall of Fame in 1999. Very active within the community and state, Bob served on numerous commissions and boards. Among many others, these included the Oregon State Judicial Fitness Commission (1973-1985) and the Oregon State Board of Higher Education (8 years). He helped found the Benton County Planning Commission (12 years and 7 years as chairman). Bob was a member of the Corvallis Lions Club for 60 years and served as an elder and choir member of the First Presbyterian Church after 55 years in the First Christian Church. He loved music, golf, travel, and most of all, his faith and family. Both lifelong friends of higher education, Bob and his wife Mary were members of the OSU Alumni Association Board, President’s Club Foundation, Beaver Club, 30 Staters, Corvallis-OSU Symphony Society and Music Association. They remained active in their support of OSU and the Alumni Center and enjoyed season tickets to OSU football, basketball and baseball games. They were often seen wearing orange and black! Robert was preceded in death by his sister, Mary, and brother, Edward. He is survived by his wife of 67 years, Mary; daughters Kathryn (Mark) and Susan (Phil); granddaughters Danielle (Daniel) and Julie (Matthias); great-grandson Silas; great-granddaughter Evelyn; and many other relatives and friends. A Celebration of Life including military honors will begin at 2 p.m., Friday, Aug. 19 at the First Presbyterian Church of Corvallis. The Reverends Matt Gough and John D. Dennis will officiate. The service will also be live streamed at www.1stpres.org. Burial will be at the Corvallis Oaklawn Cemetery at a later date. In lieu of flowers, memorial donations may be given to Corvallis Lions Club, P.O. Box 1899, Corvallis, OR, 97339. The family wishes to express special gratitude to the First Presbyterian Church, Dr. Steven Athay, Bob’s caregivers, and Benton Hospice for their extraordinary and compassionate care. Please share your thoughts and memories for the family at www.demossdurdan.com.

ROBERT R. ADAMS Robert &#8220;Bob&#8221; Adams died peacefully at home on July 30, 2016, surrounded by his family. He was 91 years old. Bob was born in Corvallis in 1924 to Russel and Lela Adams. He graduated with honors from Corvallis High... View Obituary & Service Information

The family of Robert Russel Adams created this Life Tributes page to make it easy to share your memories.