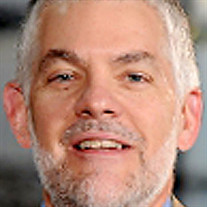 Bob Bontrager, 57, Corvallis, OR, died of cancer Oct. 17, 2014 at Samaritan Evergreen Hospice House, in Albany, OR. He was born in Sturgis, MI and grew up in Elkhart, IN. Bob married Beth Gerig on Aug. 1, 1981, in Elkhart. Bontrager came to Oregon State University in 1994 as the Associate Director of Enrollment Services after serving as Vice President of Enrollment Management at Eastern Mennonite University in Virginia. His tenure at Oregon State was filled with innovation and achievement.As director of Admission & Orientation, he oversaw an unprecedented enrollment expansion from around 13,000 students to 17,000 in a 4-year span. He was the architect of the Degree Partnership Program, a unique co-enrollment partnership with 17 Oregon community colleges and three Hawaii community colleges. Bontrager established an enrollment management structure at Oregon State in 2000. In 2004, he helped launch a holistic admissions review at Oregon State including the Insight Resume, which is used by numerous institutions around the world. After serving as Assistant Provost for Enrollment Management, Bontrager joined the Association of American Collegiate Registrar and Admissions Officers (AACRAO) to launch AACRAO Consulting and Strategic Enrollment Management (SEM) Initiatives. Bontrager authored numerous journal articles and books and served as editor for “Strategic Enrollment Management: Transforming Higher Education”. He recently co-authored a book with Don Hossler called Handbook of Strategic Enrollment Management. Bontrager earned a Doctorate of Education from Arizona State University and a Bachelor of Arts in Psychology from Goshen (IN) College. Bob and his family enjoyed traveling together. He loved the outdoors; biking, hiking, backpacking, and skiing. Bob always loved planning the next adventure. He is survived by his wife Beth and his children Jesse, (daughter-in-law) Betsy, Erin and Kevin. A gathering was held Oct. 22 in Corvallis. A second service will be held Nov. 22, at Goshen College Mennonite Church, Goshen, IN. In lieu of flowers, please consider donating to one of the following: Grand Canyon Assoc. (www.grandcanyon.org), Samaritan Evergreen Hospice House, Albany (samhealth.org/Hospice, Goshen College-Bob Bontrager Scholarship (goshen.edu).

Bob Bontrager, 57, Corvallis, OR, died of cancer Oct. 17, 2014 at Samaritan Evergreen Hospice House, in Albany, OR. He was born in Sturgis, MI and grew up in Elkhart, IN. Bob married Beth Gerig on Aug. 1, 1981, in Elkhart. Bontrager came to... View Obituary & Service Information

The family of Robert M. Bontrager created this Life Tributes page to make it easy to share your memories.