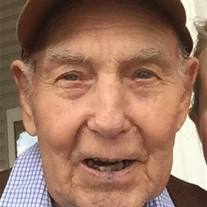 Robert 'Art" Brunston August 24, 1924 - June 10, 2017 Robert "Art" Brunston was born on August 24, 1924 in Penrose, Arkansas. He was the first of six children born to John and Laura (Stokes) Brunston. The family moved to Corona, CA when Robert was about 2 years old. He graduated from Corona High School and worked for Mava Ice Cream for many years. He married Ruth Woodward on August 20, 1949 in Las Vegas, NV. In the 1950s they moved from Corona to Riverside, California where they purchased "Black's Liquor Store." Their three children were born in the early 1960's there in Riverside. In 1975 they moved to Ashland, Oregon where they purchased a small 10-acre farm and raised pears and a variety of farm animals. Robert's wife Ruth died in 2001. They had been married for over 50 years. In 2005 he sold the farm and moved to Bellfountain to live with his son Glen. He met Johanna Van Beek, who became a close friend and she brought much joy to the rest his life. On Easter Sunday 2011 Robert was baptized and received into the Christian family at Oakville Presbyterian Church. Robert was a member of the Elks Lodge for over 60 years. He enjoyed racing homing pigeons, hunting and fishing. In 2014 he moved to the Caring Place in Corvallis. Robert will be remembered as a man with a huge work ethic, supportive, caring, and a cheerful, easy-going disposition. He is survived by his son Glen Brunston of Bellfountain, OR, his daughters Karen Henry of Medford, OR and Kathleen Fuller of New Braunfels, TX, his half-sister Wanda Lee (Green) Fenton of Rancho Cucamonga, CA, 7 grandchildren and nephew William Benjamin "Ben" Brunston Jr. of Darby, MT. He is proceeded in death by his wife Ruth, his brothers Cecil and William Benjamin "Ben" Brunston Sr., and sisters Dorothy and Lucille. A memorial service will be held at Oakville Presbyterian Church 29970 Church Drive Shedd OR at 2 p.m. on Wednesday, June 14th. There will be a graveside service June 21, 2017 at 12:00pm at Scenic Hills Memorial Park, 2585 E. Hills Dr., Ashland, OR. All friends and family of Art Brunston are welcome to attend these services. Please share your thoughts and memories for the family at www.demossdurdan.com

The family of Robert 'Art" Brunston created this Life Tributes page to make it easy to share your memories.