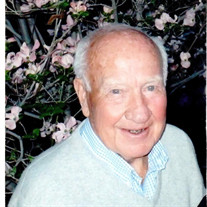 January 22, 1924 — November 28, 2017 Robert D. Edwards entered this world as the fourth male child of Evelyn and Herman Edwards in Marshfield (Coos Bay), Oregon on January 22, 1924. His river boat captain father died when he was only three months old, leaving him without a role model to emulate. Evelyn raised her four boys through the Great Depression moving from town to town. The boys supported their mother and themselves by working in the agricultural fields picking berries and weeding in the onion fields, while their mother took care of friends needing help. They eventually returned to Coos Bay where Bob and his brothers operated a river boat named “Favorite” on the Coos River. Bob was a gifted athlete who competed in the football and basketball programs at Marshfield High School and achieved an all-state award in basketball his senior year. He also participated in intramural teams in the Navy. At the outbreak of World War II, and before high school graduation, Bob applied to Kings Point Merchant Marine Academy in New York and completed his two-year degree program, which included service on several merchant ships in the South Pacific, and was commissioned in the United States Navy and served on several ships in the war zone, including the USS Cabot (CVL-28), which was awarded nine battle stars for participation in various combat operations, including the sinking of the mega Japanese Battleship, Yamato. On November 25, 1944, the USS Cabot was hit with a Kamikaze warplane, and 125 of Bob’s shipmates were killed, including his roommate Frank Lyons. Bob was First Division Officer responsible for the 40 MM anti-aircraft guns on the forward starboard portion of the ship. His division was responsible for the shoot down of nine Japanese suicide planes. Bob personally received the Navy Achievement Medal from Rear Admiral Bull Halsey for his Division’s heroic performance. After the signing of the Japanese surrender, Bob was sent to Hawaii to take command of a sub chaser that had battle damage and to deliver it back to the US mainland. He had attained the rank of Lieutenant, United States Navy Reserve. While on leave, and visiting home with his mother in Halsey, he attended the First Methodist Church on a Sunday and observed a young blonde girl playing the piano and reading scripture. The rest is history, as he met and married Catherine C. Smith of Halsey in June of 1947. Bob and Cathy moved back to Coos Bay in 1947 and produced three sons and a daughter. Bob owned and operated a logging company with his three brothers and built a lumber mill in Port Orford, Oregon. In 1957, Bob decided that he needed to complete his Bachelor’s Degree, so he moved his young family to Corvallis to attend Oregon State College in the fall of 1957. He graduated in 1961. While attending college, he constructed the Campus Villa Apartments. This visionary achievement led several colleagues to come to Corvallis to provide rental units to college students and staff studying and working at OSU. Bob went on to construct and develop many other buildings in Corvallis, Albany, Sweet Home, Newport, Lincoln City and Coos Bay in the following years. He also constructed and was awarded Building of the Year Award for Liberty Centre in Poulsbo, Washington. He was twice awarded by the City of Corvallis for his buildings’ outstanding architectural designs. At the time of his death, Bob still owned the Plum Tree Apartments. Cathy preceded Bob in death in 2003, and Bob subsequently married Eleanor Strowbridge of Corvallis. Bob is survived by Ellie and his four children, Robert, Jr., Scott, James, and Teresa McLeod, as well as three grandchildren and five great grandchildren. In lieu of flowers memorial contributions may be made to the OSU Foundation at 850 SW 35th St, Corvallis, OR 97333.

January 22, 1924 &#8212; November 28, 2017 Robert D. Edwards entered this world as the fourth male child of Evelyn and Herman Edwards in Marshfield (Coos Bay), Oregon on January 22, 1924. His river boat captain father died when he was only... View Obituary & Service Information

The family of Robert Duane Edwards created this Life Tributes page to make it easy to share your memories.