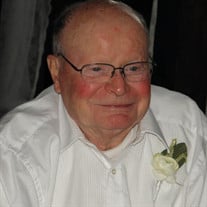 May 19, 1928 — March 23, 2016 Robert Louis Gay, 87, resident of Philomath, passed away on March 23, 2016, at the Samaritan Evergreen Hospice House in Albany. Robert was born in Iowa City, Iowa, on May 19, 1928. Son of George Robert and Helen (Lake) Gay, his family included two sisters and three brothers. He attended Iowa City High School and graduated with the class of 1946. He served during the Korean conflict with the U.S. Army and attained the rank of sergeant; he received two Bronze Service Stars. On June 21, 1953, Robert was united in marriage with Jeannine “Jeannie” Ann Culp in Iowa City and then honeymooned in Florida. He was active in the Iowa State Junior Chamber of Commerce and received the Ken Holvenstot Award for Outstanding State Director in 1958. He was a charter member of the Iowa City Sunrise Optimist Club and was a leader of the Newport Rangers 4-H Club. He worked in the family's Gay Locker Company for many years. In 1970, Robert moved with family to Corvallis. He worked for Richey's Market as a butcher. In 1973, he purchased and operated the Gay's Myrtlewood Gift Factory in Philomath. In 1983, Robert and Jeannie moved to Philomath. He was honored as the Oregon Retailer of the Year (1985-86). Later he was a realtor for Landmark Realty. He was very active in community affairs. Robert was a member of the Lion's Club since 1973; received a Certificate of Appreciation in 1985; received the Melvin Jones Fellow Humanitarian Services Award in 1994; and was honored at the Philomath Community Recognition Celebration in 1998. He participated on the City of Philomath Water Plant Commission (1995-1997) and the Transportation and Traffic Safety Commission (1993-99). He received a Certificate of Appreciation from the Police Department in 1996. He received a Community Service Award in 1998. Robert always cherished his participation in the planning and building of the Philomath Youth Activities Center (1999-2001). Robert was preceded in death by his parents, two sisters and two brothers. He is survived by his wife, Jeannine; sons Douglas (Sergio), Wayne (Michelle), Brian (Tina), Jeffrey (Sanae) and Dale (Sandi); grandchildren Richard, Cooper, Montana, Anna, Noelle, Lila, Kenta, Michelle, Sarah and Nicholas; and great-grandchildren, Ainslie and Dominic. Family requests donations be made to the Samaritan Evergreen Hospice House and/or the Philomath Youth Activities Center, Po Box 1358, Philomath, OR 97370 Family invites you to a Celebration of Life in honor of Robert from 2 to 5 p.m. Saturday, April 2, at the Philomath Scout Lodge, 660 Clemens Mill Road, Philomath. Please share your thoughts and memories for the family at www.demossdurdan.com

The family of Robert L. Gay created this Life Tributes page to make it easy to share your memories.