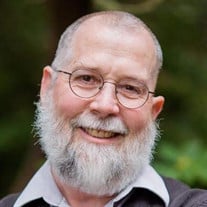 Robert S. Iltis, 63, passed away on March 14th, 2019 at his home outside of Philomath, Oregon after a two year battle with brain cancer. He was born in Denver, Colorado on October 16th, 1955 to Charles and Mary Iltis. He joined his two older brothers, Charlie and Michael, in a home filled with love, laughter and plenty of discussion. Robert loved school and was always a voracious reader. He learned to excel in speech and debate and enjoyed acting in plays. He graduated from Central Catholic High School in Denver in 1974. His college years were spent in the Speech Communication and Theatre Department at Colorado State University in Fort Collins, Colorado. While working as a student worker at the Physical Plant on campus, he met his future wife, fellow student worker, Snick (Sue) Lamkin. They were working together to clean up after a Bob Dylan Concert (Hard Rain) at the CSU Hughes Stadium in May 1976. After four years as friends, sparks flew. Robert and Snick were married in 1980. Within the next year, Robert finished up his Master’s degree at CSU. They welcomed their first born, Gabriel, into the family and then decided to move to Madison, Wisconsin to earn his PhD at the University of Wisconsin. Within a few years their son, Jacob, and daughter, Claire joined the family. Many good friends were made in Graduate school. Robert took his first Assistant Professorship at Texas Tech University, in Lubbock, Texas, where sons Joseph and Santana were welcomed into the family. In 1991, Robert accepted a position at Oregon State University, where he taught for over 27 years. He was honored to serve as Department Chair in the Speech Communication Department, for part of his tenure. Teaching and mentoring students was one of the great passions of Robert’s life, as many of his colleagues and former students can attest. He always said that working with students was what he loved most about being a Professor and that his students and colleagues helped make every day at the office enjoyable. In his last days, he asked Snick to write a note letting his students and colleagues know how he felt about them, it said: "I love you. I have had a good life. Thank you." Robert’s pastimes included coaching his children’s soccer teams, spending quality time with his grandchildren, playing the mandolin, gardening, cooking, baking bread, and beer and wine making. On any given weekend, you could count on waking in the morning to the smell of his pancakes wafting from the kitchen and later be excited to find out what he had planned for Sunday dinner. You could fill a book and still not encompass all of Robert’s accomplishments, and the contributions and positive impact that he had on his family, friends, colleagues and students. Robert was a man of great faith, who chose to express that faith by showing love, kindness and compassion to all he encountered. He will be greatly missed. Robert is survived by his wife of 39 years, Snick and his beloved children, Gabriel (Christina), Joseph (Amy J.), Jacob (Bethany), Santana (Amy), and Claire (John) Semadeni, 9 grandchildren, brothers Charlie (Lynne) and Mike (Maria), and many cousins, nieces and nephews. Robert was predeceased by his parents Charles and Mary Iltis. There will be a Vigil and Rosary Service at 7:00 pm on Thursday, April 4th the DeMoss-Durdan Funeral Home, 815 NW Buchanan Avenue, Corvallis. A Funeral will be held at the St. Mary's Catholic Church 501NW 25th Street, Corvallis, on Friday, April 5th at 11:00 am, with a luncheon to follow. We would like to thank Samaritan Evergreen Hospice for their exceptional assistance during the last few weeks of Robert’s life. The family asks that donations in memory of Dr. Robert Iltis be made to the Speech Communication Scholarship Fund at the Oregon State University Foundation, 4238 SW Research Way, Corvallis, Oregon 97333. Donations can also be made online at osufoundation.org. Please note "In memory of Robert Iltis" on the memo line or online form.

Robert S. Iltis, 63, passed away on March 14th, 2019 at his home outside of Philomath, Oregon after a two year battle with brain cancer. He was born in Denver, Colorado on October 16th, 1955 to Charles and Mary Iltis. He joined his two older... View Obituary & Service Information

The family of Robert Stephen Iltis created this Life Tributes page to make it easy to share your memories.