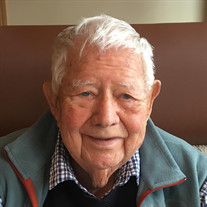 Robert (Bob) Gribble Ringo, a Corvallis community leader and attorney for more than six decades, passed peacefully at his residence the morning of Wednesday, April 5. The memorial service will be held at 10:00 a.m. on Monday, April 10 at the... View Obituary & Service Information

The family of Robert G. Ringo created this Life Tributes page to make it easy to share your memories.