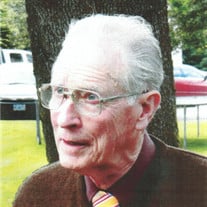 Robert Johnson Schaefers July 6, 1931 — September 11, 2017 Robert Johnson Schaefers was the second son born to Albert J. Schaefers and Anna M. Johnson in Eugene on July 6, 1931. He graduated from St. Mary’s High School in 1949. He joined the Air Force in 1951 and spent two plus years stationed in Japan during the Korean War. After his discharge in 1954, he attended Oregon State University, graduating in 1961 with an engineering degree in Production Technology. In 1960, he married Elizabeth Tracy at St. Patrick’s Church in Lakeview. They made their home in Corvallis and later started a retail/service business on 9th Street. Bob served as a Cub Scout leader for the Scouts at Fairplay Elementary school for many years. He volunteered for 14 years with the Stone Soup program at St. Mary’s Catholic Church. Bob leaves behind his wife, Elizabeth and their 5 children, Andrew (Monique), John, James (Cheyenne), Alexandra all of Corvallis and Julie (Chris Rowe) of Golden, Colorado; three grandchildren, Noah, Melissa, and Luka, all of Corvallis; and brother Albert (Carole) in Coos Bay. He will be dearly missed, especially for his effusive joy. Family and friends are invited to pray the rosary 7:00 pm, Thursday Sept. 14, 2017 at DeMoss-Durdan Funeral Home, 815 NW Buchanan Avenue. Memorial Mass, 10:30 am, Friday, Sept. 15th at St. Mary's Catholic Church, 501 NW 25th Street, Corvallis. with lunch following in the Sienna Room. In lieu of flowers donations can be made to St. Mary’s Poor Fund, Benton Hospice or to a Veteran’s Association.

The family of Robert Schaefers created this Life Tributes page to make it easy to share your memories.