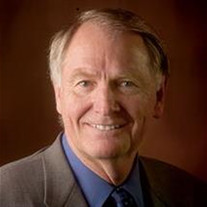 WESTLUND, Robert Eugene July 25, 1934 to May 14, 2016 Robert Eugene Westlund, 81, passed away peacefully in Corvallis, OR on May 14, 2016. He was born in Alhambra, CA on July 25, 1934 to Lelah and Walter Eugene Westlund. He spent his early years attending schools in the Alhambra School District, then attended UCSB, where he received his B.S. in 1956, Master’s in 1957. He then served as an aviation officer in the US Navy. A gifted communicator, Bob was known to recognize humor in his business dealings and amongst his many friends. He was a valued member of the Oregon State University Foundation for nearly 22 years, retiring as vice president for principal gifts to athletics in 2013. He was instrumental in the major facility improvements of Reser Stadium, the Valley Football Center, the Merritt-Truax Indoor Center, Prothro Footballl Complex, and Goss Stadium at Coleman Field. Early in his career Bob served as vice president of W.M. Keck Jr. Foundation in Los Angeles, and director and vice president of the Keck family’s Coalinga Corporation. He was the development director at the University of Southern California School of Business from 1975-80, and later the executive director for the southern California region 1980-85. Bob was preceded in death by his daughter, Alison Hester, and his son Ross Lewis Westlund, as well as his parents. Bob is survived by his grandchildren Madeline and Toby Hester, son-in-law Bryan Hester, sister Janice (Bingham) Cherrie, and nephews Matthew (Eva) Cherrie and Daniel (Carolyn) Cherrie. Also his former wife & friend Wendy Ross, and many wonderful cousins, nieces, nephews, family and friends whose lives have been touched by this funny and kind man. Our family is extremely grateful to Jennifer and Dave Milburn and Mike Brantley and Kay Yates for their wonderful friendship and amazing support of Bob in his last year. The OSU Foundation will hold a Celebration of Bob’s Life on June 20, 2016, 3 to 5 p.m. in the Loge at Reser Stadium. Gifts in Bob's memory may be made to the Nature Conservancy of Oregon, www.nature.org/oregon. Please share your thoughts and memories for the family at www.demossdurdan.com.

The family of Robert Eugene Westlund created this Life Tributes page to make it easy to share your memories.