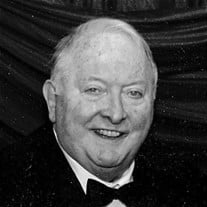 Jan. 6, 1933 — Sept. 9, 2015 Robert Elliot “Bob” Wilson of Corvallis died Sept. 9, 2015. Bob was born in Perth Amboy, New Jersey, on Jan. 6, 1933, the son of Elliot and Grace Wilson. Bob graduated from Tottenville High School, Staten Island, New York City, in 1950, and entered the United States Coast Guard Academy in July of the same year. In 1953 he married Mary Nancy Esslinger. They subsequently moved to Oregon to start a family and for Robert to finish school at Oregon State College (now University), where he earned his B.S. in mechanical engineering in 1955. In 1956 he received a master’s degree from the University of Illinois, and began working at Rocketdyne in Los Angeles. The following year, Bob began working as an instructor at Oregon State while completing his Ph.D. Bob returned to the Los Angeles missile business in late 1960 as manager of the Gas Dynamics section for Aerospace Corporation. He returned full time to OSU in 1963 where he remained for 37 years in the Mechanical Engineering department working as Associate Professor, Professor, and at retirement in 1996, Professor Emeritus. In 1970, Bob married Joanna Starzinger Frigault of Palo Alto, and embraced her children as his own. Together with James Welty and Charles Wicks, Bob wrote an engineering textbook covering fluid flow and heat and mass transfer. First published in 1968, the book is now in its sixth edition. In 1973, Bob started research on wind energy. He liked to say his first experience with wind energy was as a crew member on the USCG's tall ship “Eagle,” crossing the Atlantic both directions in 1951. At OSU Robert developed analysis methods for determination of wind turbine power output and later, computer codes that predicted the various loadings on wind turbine blades. He also developed the first flow model for the "eggbeater" wind turbines. In addition to his research at Oregon State, he served as a consultant to many organizations including the IRS. Bob was a Fellow of the American Society of Mechanical Engineers, a registered Professional Engineer, and member of the Tau Beta Pi, Pi Tau Sigma, and Sigma Tau honoraries. He also served on the Corvallis City Council, and for more than a decade was an active member of both the City of Corvallis and Benton County special transportation committees. Sports were always an important part of Bob's life. As a star high school baseball player, one of his greatest highlights was playing in a city league playoff game in Ebbets Field, then home of the Brooklyn Dodgers. Bob went on to play baseball at the Coast Guard Academy. A true Beaver Believer, he held season tickets for OSU football and basketball for over 50 years. Bob was well known as a man of humor, and loved to make people laugh. His sharp wit was a joy (and occasional groan) to his family, friends, colleagues and students. Much of his humor was so highbrow that one of his students quipped, “You had stand up to catch his jokes.” Bob could not have said it better. Bob loved his cars and always kept them in tip-top shape. He enjoyed collecting model cars and trucks, but his favorite hobby was his elaborate and extensive toy train collection. After his retirement, Bob devoted much of his time to genealogy. Through extensive research, he compiled genealogies for both family and friends. Bob is survived by Joanna, his wife of 45 years; children Wendy Doran, Robert Wilson, John Wilson, Jim Wilson and their families; Joanna's children, Leslie Taylor, Pamela Starzinger, Renee Jaffer, and their families; sister Charlotte Cowan; 10 grandchildren and two great-grandchildren. A celebration of life is planned for 2 p.m. Sunday, Sept. 20, at the Corvallis Country Club. Bring stories and photos to share. Private interment will be earlier in the day at Oaklawn Cemetery in Corvallis.

The family of Robert Elliot Wilson created this Life Tributes page to make it easy to share your memories.