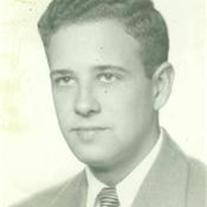 Dr. Roger Gene Petersen of Corvallis passed away Thursday, Aug. 3, at Good Samaritan Regional Medical Center. He was 87. The son of Oliver Wendell and Lela Schmidt Petersen, he was born in Essington, Pa. He graduated from Prospect Park (Pa.) High School in 1942. After graduating, he served with a rifle company in the 84th Infantry Division in the European Theater during World War II. He attended Iowa State College, earning a bachelor’s degree in 1949 and a master’s degree in1950, before completing his PhD at North Carolina State College in 1954. Roger married Jean Napier Hurt on June 26, 1948, in Ridley Park, Pa. The couple has one child, a son: David Eric. Dr. Petersen joined Oregon Agricultural Experiment Station as Experiment Station Statistician in 1955. He joined the staff of the Department of Experimental Statistics at North Carolina State College in 1961. He returned to the Department of Statistics at Oregon State University in 1965 as professor of statistics, in addition to his position as Agricultural Experiment Station statistician. He retired as Professor Emeritus in 1990. He taught numerous classes in applied statistics and served on many graduate students’ advisory committees. His specialty was in the design and interpretation of experiments. He also taught in the Department of Crop and Soil Science. While at OSU, Dr. Petersen served several terms on the Faculty Senate, including a term on the Executive Committee. He also served for ten years as Chairman of the Board of Recreational Sports. During his tenure in this post he helped inaugurate the Dixon Recreation Center, a general purpose facility for student’s recreational use. In 1973 he served as visiting professor at the Institute of Statistical Studies and Research at Cairo University, in Cairo, Egypt, as a consultant for The Ford Foundation. From 1978 to 1986 he served as a Senior Scientist for the International Center for Agricultural Research in the Dry Areas (ICARDA) in Aleppo, Syria, where he consulted with agricultural research scientists throughout North Africa and the Middle East. In 1988 and 1992 he served as a consultant to the MART Project of the Winrock International Institute for Agricultural Development in Islamabad, Pakistan. Since his retirement in 1990 he and his wife, Jean, have travelled extensively. They have also spent some time pursuing the elusive golf ball at the Corvallis Country Club where they have been longtime members. Dr. Petersen was a member of the American Society of Agronomy and was statistics editor for the Agronomy Journal from 1969-77. He was also a member of The Biometric Society, serving as President of the Western North American Region in 1983. Dr. Petersen was also an honorary member of the honor society Phi Kappa Phi and Sigma Xi: The Scientific Research Society. He was a member of the North Raleigh Optimist Club, Corvallis Rotary Club, and served on the OSU Federal Credit Union Board of Directors from 1987-1991. Other memberships included Theta Chi Fraternity and Corvallis Country Club Wilderness Trailriders, Inc. Dr. Petersen received the R.M. Wade Award for Excellence in Teaching from the OSU College of Agriculture in 1988, and the OSSSO Award from the OSU Statistics Department in 1989. Besides his wife, Jean, He is survived by their son, David E. Petersen, and his wife, Colleen, grandson, Benjamin, and granddaughters, Haley and Lindsey, all of Bend; and sister, Ellen M. Richards, of Arlington, Va. At Dr. Petersen’s request, no services will be held. Memorial contributions can be made to the E.R. Jackman Foundation, College of Agriculture at Oregon State University, or the Anatomical Research Fund at Oregon Health Sciences University.

Dr. Roger Gene Petersen of Corvallis passed away Thursday, Aug. 3, at Good Samaritan Regional Medical Center. He was 87. The son of Oliver Wendell and Lela Schmidt Petersen, he was born in Essington, Pa. He graduated from Prospect Park... View Obituary & Service Information

The family of Roger Petersen created this Life Tributes page to make it easy to share your memories.