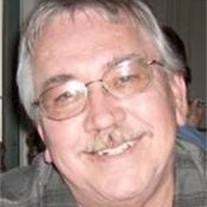 Sept. 3, 1946 — Feb. 8, 2013 Ronald Howard Jensen of Corvallis went to be with the Lord on Friday, Feb. 8. He was 66 years young and had lived a wonderful life. He was born in Ithaca, N.Y., to Howard and Virginia (Ledbetter) Jensen. His family eventually moved to San Jose, Calif., where he went to school, graduating from Palo Alto High School in 1964. After high school he entered into an apprenticeship in tool and dye making. He worked for several years at United Technologies as a tool and dye maker. In 1976, he was hired by Hewlett Packard and moved to Corvallis, Ore., where he continued designing tools. Ron was a typical MacGyver. He was always inventing and creating new ways of doing things. Not content merely designing for Hewlett-Packard, he ran a side business, RJ Tool Design, where he designed tools for other companies. Ron was known for his long winded conversations and his good-hearted nature. He had many hobbies including his passion for motorcycles, wood working, tinkering in his shop, and teaching his dog, Murphy, new tricks. Ron was a perfectionist and it showed in whatever he was working on at the time whether it was tooling or wood working. He loved the arts, especially opera. While riding his tractor he would often listen to opera music on his iPod. Ron and Debbie were married on April 4, 1985 in Reno, Nev., which was one of his favorite places to go to play roulette. They traveled many places and took their family on many camping adventures, fishing trips and even cruises. He loved making Christmas gifts out of wood and always waited until Christmas Eve to make them. His wife Debbie will cherish forever the gifts he gave her during that time. Ron and Debbie were avid motorcycle riders. Ron particularly enjoyed riding the 1974 Harley Davidson which he had restored in his daughter Robin’s memory and loved showing it off. After the death of their daughter, Robin, Ron and Debbie organized an annual ride of silence with the Mid-Valley Bike Club to honor those that have been killed or injured by motorists. The first ride began in 2005 and still going strong on the third Wednesday in May every year. Ron has always wanted to build an equipment shed on the track field at Crescent Valley high School in memory of his daughter, so in lieu of flowers, the family requests donations be made for the Crescent Valley equipment shed through the 509J School District. Ron would also like to continue having donations made to the Robin V. Jensen Memorial Scholarship through the Benton County Foundation. All donations are tax deductible. Ron was devoted to his family and had the biggest heart anyone could have. He left behind his wife, Debbie; daughter, Nicole and son-in-law Brad Dysinger; grandchildren, Bailey, Mackenzie, and Robie Dysinger; sister, Karyn Jensen of Seattle, Wash.; and Roger and Ann Hubbell of Ithaca, N.Y. He was preceded in death by his daughter, Robin, in August 2004, and by his parents, Howard and Virginia (Ledbetter) Jensen. A celebration of life will take place at 2 p.m. Saturday, Feb. 16, at the Hill Street Church of Christ, 1805 Hill St. SE, in Albany. All are welcome that enjoyed the company of Ron and his family. If you have a favorite story or memory of Ron, please share it with the family in care of DeMoss-Durdan Funeral Home, 815 NW Buchanan Ave., Corvallis, OR 97330, or by commenting via the guest book or private condolence links above.

The family of Ronald Jensen created this Life Tributes page to make it easy to share your memories.