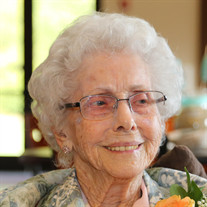 Ruby Marie (Morley) Crawford went to her Lord on May 3rd. 2018 surrounded by her family and friends. Ruby was the second of 5 children born to James "Ross" and Charlotte (Wallet) Morley in Corvallis Oregon, on October 2, 1917. At the age of 3, the family moved to Albany. Ruby attended the United Presbyterian Church, now called White Spires Church. She graduated from Albany High School in 1936 and attended Albany College for 2 years. On April 9th, 1942 she married Lane M. Crawford. They lived and farmed land on Hwy 20 near Garland Nursery. During WWII, Lane joined the Navy and was stationed in Norfolk, VA as an air craft mechanic. Ruby followed and they spent the war in Norfolk, VA. After the war they returned to the farm between Albany and Corvallis. In 1952 Ruby gave birth to her only child, a daughter, Christine. Ruby worked as a silk presser for Hub Cleaners in Albany, Oregon for over 30 years. She was a member of the Buzzing Dozen Dinner club, which she attended for over 50 years. In 1955, the family moved to a larger farm off Independence Hwy. There they raised Angus Cattle, grew a variety of crops, and finally settled into growing grass seed. During this period Ruby and Lane bought an air stream trailer and traveled the Western US with relatives. They later purchased a pickup and camper and traveled all over the western US. They especially liked to travel to Oklahoma for Lane’s Family Reunion. They also enjoyed traveling with friends and neighbors to Death Valley each winter and around Oregon to all the hot springs they could find. Ruby enjoyed gardening and was an accomplished seamstress. She was a life time member of Grange, a member of Women for Agriculture, a 4-H co-leader with her good friend Virginia Kutsch in Cooking and Sewing. In 1981, they sold the farm on Independence Hwy. and moved to Scio, Oregon where they bought a home on Thomas Creek. There they retired and Ruby joined the art community and learned to paint. She continued to preserve foods that Lane grew in the garden, do needle work, crafts, and travel as often as they could. She enjoyed attending Scio Christian Church. Lane died in 1999 and Ruby moved back to Albany, building a home next to her daughter. There she spent the last 17+ years of her life. She traveled with her daughter and enjoyed visits from her friends and family. She joined the Willing Workers of North Albany and kept in contact with many of her friends from the Independence Hwy. farm area. Ruby was preceded in death by her parents; her Husband; sisters, Neva (Ed) Geijsbeek and Gladys (Carmine) DeSantola; and brothers Joel (Corgia) Morley and James(Margaret) Morley. She is survived by her daughter, Christine (Stephen) Knight of Albany; Grandson Boyd (Kari) Knight of Newberg; Great-grandchildren Denver, Callier, and Harper Knight. Nieces, JoAnne (David)Ward of El Paso, Texas; Ann (Geijsbeek) Houghtby of Red Bluff, California; Zoe Lynne Morley of Klamath Falls; Kathryn (James) Burnson of Deer Park Washington; Nephews, Gary(Alice) DeSantola; David ( Kathy) Geijsbeek of Red Bluff, California. Family and friends are invited to her graveside service, 10:30 a.m. Thursday, June 7, 2018 at North Palestine Cemetery, 5242 Palestine NW Ave, Albany, OR In lieu of flowers, donations may be made to Scio Christian Church,38955 NW 2nd Ave, Scio, OR 97374; Samaritan Evergreen Hospice, www.samhealth.org, or Willing Workers c/o Margy Coker 4643 Scenic Drive NW, Albany, OR 97321.

Ruby Marie (Morley) Crawford went to her Lord on May 3rd. 2018 surrounded by her family and friends. Ruby was the second of 5 children born to James "Ross" and Charlotte (Wallet) Morley in Corvallis Oregon, on October 2, 1917. At the age of... View Obituary & Service Information

The family of Ruby Marie Crawford created this Life Tributes page to make it easy to share your memories.