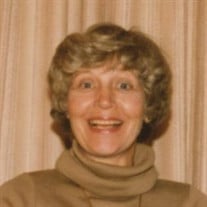 February 2, 1922- October 14, 2018 Ruby E. Donahue passed away peacefully on Sunday, October 14th, at her home in Albany, Oregon with her son and her favorite caregiver at her bedside. She was just four months shy of her 97th birthday. Ruby Willa (after author Willa Cather) Ecklund was born in Kiron, Iowa, the daughter of Russell and Erma Ecklund, and she was raised on her parents’ farm near Denison, Iowa with her brother Bill, her identical twin sister Ruth, and her sisters Norma and Winifred (“Winnie”). Her father grew corn and raised some dairy cows, and her mother tended the house and cooked wonderful meals for the farm workers. Ruby was valedictorian of Denison High School, and at 17 started attending a business school in Omaha. After graduating she began working for an Omaha insurance company, then at 19 she bravely took the train alone to Washington D.C. to begin working in the steno pool for the Federal Bureau of Investigation. It was there that she met a new FBI agent, Norbert Donahue, and the couple married in 1942. From there they were transferred to various cities for short periods of time – Jackson Michigan, Detroit, Los Angeles, Missoula - and then settled in Kalispell in 1948. They raised their children in Kalispell, and after they were all in school, Ruby began working outside the home as a part time assistant at the family medical office of Drs. Wildgen & Gould. Ruby was very active and enjoyed many outdoor activities with Norb and their good friends. She loved playing golf at Buffalo Hill Golf Club, skiing at Big Mountain, playing tennis with her friends in Kalispell, and hiking in Glacier Park and other parts of western Montana. She was an excellent bridge player and was active for many years in the Kalispell Duplicate Bridge Club. Ruby also loved to travel, and she and Ruth took trips to China, Russia, Mexico, and throughout Europe. Although hip replacement kept her from the ski slopes in later years, she continued to play golf, tennis and bridge well into her 80s. As part of their 90th birthday celebration, Ruby and Ruth played nine holes of golf in Medford, Oregon! Ruby moved to Albany Oregon in 2010 and resided in her home there as part of the Mennonite Village care community until her passing. Ruby is survived by her son Mark of Corvallis, Oregon; her son Barry (Michele) of Ellensburg, Washington; her grandsons Kevin (Cristina) Abley, Brian (Christina) Abley, and Sean (Matt) Abley; and three great granddaughters. She is preceded in death by her husband Norb, her son Patrick, her daughter Michele Abley, her sisters Norma and Winnie, and her brother Bill. Ruby was a beautiful, happy, healthy, active lady who made the world’s best huckleberry pie. She was very thankful for the wonderful friendships she had in Kalispell. She will be greatly missed. Any memorial contribution in her memory can be made to any local Hospice or to Samaritan Evergreen Hospice in Albany, OR who provided care to Ruby in her last three months.

February 2, 1922- October 14, 2018 Ruby E. Donahue passed away peacefully on Sunday, October 14th, at her home in Albany, Oregon with her son and her favorite caregiver at her bedside. She was just four months shy of her 97th birthday. Ruby... View Obituary & Service Information

The family of Ruby E. Donahue created this Life Tributes page to make it easy to share your memories.