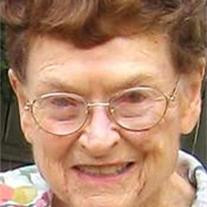 Ruth May Vaughan, 99, died Feb. 1 of age-related causes. She was born to Dewey and Marion Bullis in Waterloo, Quebec, Canada. Soon after her birth, her father migrated west in search of a farm, and eventually settled in the small town of Gaston. Ruth went to a one-room school in the countryside for eight years, and graduated from high school in Portland in 1930. She then went on to graduate in home economics from Oregon State University during the 1930s. While a student at OSU, she met and fell in love with Edward K. Vaughan, who was working on his master's degree in agriculture and botany. Ruth married Ed on July 10, 1932, in Centralia, Wash. Ruth and Ed moved to St. Paul, Minn., while Ed worked on his doctorate in botany. They also lived in New Jersey, Virginia and Georgia prior to returning to Corvallis in 1947, where Ed was a professor in botany at OSU. During sabbatical leaves from OSU, Ruth and Ed lived in the Netherlands and New Zealand. Ed retired from OSU in 1974, and Ruth and Ed went to Iran for two years while Ed helped to develop better agriculture production and procedures. Ruth traveled around the world during those years. Ruth was president of the Corvallis Garden Club and the Hospital Auxiliary many years ago. She was a member of the Delta Gamma sorority at OSU. She loved to garden and particularly enjoyed her azaleas and rhododendrons. At one time, she and Ed owned a blueberry farm near Corvallis, and Ruth ran a crew of pickers every summer. She loved going over to the Oregon coast and especially Yachats, where she could walk in the sand and watch the waves and changing weather patterns. She loved horses and collie dogs, and was a member of First Baptist Church in Corvallis. Ruth was a perfect mother and a friend to so many people. She loved raising her two sons, Larry and Rodney. She was always a gracious and generous host and loved to prepare gourmet foods for her friends. Nutrition was her No. 1 priority. Her concern was always for others, and she gave of herself and all she had until the very end. Ruth left us at age 99 to join her husband, who passed away in 1990; her younger son, Rodney, who passed away in 1974; and her brother, William Bullis, who passed away in 1992. Her gentle spirit and kindness will be greatly missed. Ruth is survived by her son, Lawrence Vaughan, and his wife, Rebecca; grandsons Matthew and Mark; and great-grandchildren Brendon, Alexandrea, Emma, Bryce and Grace. A memorial service will take place at 3 p.m. Wednesday, Feb. 16, at First Baptist Church in Corvallis. Memorial contributions can be made to the Juvenile Diabetes Research Foundation or the American Diabetes Association, in care of DeMoss-Durdan Funeral Home, 815 N.W. Buchanan Ave., Corvallis, OR 97330.

Ruth May Vaughan, 99, died Feb. 1 of age-related causes. She was born to Dewey and Marion Bullis in Waterloo, Quebec, Canada. Soon after her birth, her father migrated west in search of a farm, and eventually settled in the small town of... View Obituary & Service Information

The family of Ruth Vaughan created this Life Tributes page to make it easy to share your memories.