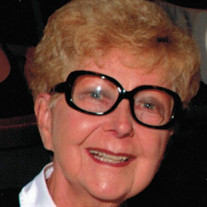 Local resident Ruthann Root, and beloved wife of George Root, passed away May 4, 2015 at Regency Park Place in Corvallis after a lengthy illness. Ruthann was born April 13, 1930 in Mansfield, Ohio to Perry Bush and Floda Eckerly Bush. The first in her family to attend college, Ruthann graduated from Ohio University with a B.S. in Elementary Education in 1952. Ruthann never forgot that her parents mortgaged their modest home to give her this opportunity. She was a good student and an active member of the Alpha Delta Pi sorority. After a short stint as a 3rd grade teacher, Ruthann’s older brother talked her into applying with an airline and she was hired by Trans World Airline. She loved this experience as a flight attendant in the days when air travel was a privilege and a luxurious experience in first class. At the end of her days as an air hostess, she returned to TWA as a reservationist and later as a sales agent with their computer reservation system, “Worldspan”. Ruthann’s patience, excellent work ethic and lovely personality made her an exemplary employee who was held in high regard by supervisors and customers alike. She met her husband, George, in Southern California and they were married on November 1, 1969 in Hemet, California. This fall they would have celebrated their 46th wedding anniversary. George’s children. (Lee Ann and Jon) and grandchildren quickly became “ours” as they adored Ruthann’s inner beauty and sage mentoring. The first year after George and Ruthann married, their children presented her with an award on Mother’s Day that said, “Best Mother on Short Notice”. She was a loving and attentive mother to her instant family; her passing leaves a void that cannot be filled. Ruthann’s parents and three siblings, (one brother and two sisters) preceded her in death. She is survived by her husband, George Talcott Root of Corvallis; our children, daughter, Lee Ann Ries, (Douglas) of Aurora, Oregon and son, Jon Root of Redwood City, CA; our grandchildren, Jennifer Castner Melion (Chad) of Calgary, Canada, Kathryn Sharman and Taylor Sharman of Lake Oswego, OR; our loving nieces, Victoria Dickson (David Ahlfeld), Shaleen Rawlings, Debbie Chucci (Ken); great-niece Amy Stevens (Peter Birk) and great-nephew, Buck Stevens (partner Inaki). The family wishes to give special tribute to all those outside our family who gave so much physical and emotional support to Ruthann and George during the very difficult 2 ½ years of her illness: Longtime Corvallis residents and fellow classmates at Corvallis High School, Glee and Tom Butler; neighbors, Sue Woods Beitel (also CHS alum) and Vicki and Gary Moehler who would often leave food at the door with a note to “put this in the refrigerator”; Fran Dossett, expert private caregiver; Hospice volunteers, Penna and Brenda; Social Worker, Nancy and nursing staff; Corvallis County Club members and staff, as well as the Regency Park Place staff and the many caregivers who told family that Ruthann was “their favorite patient”. Ruthann requested that there be no services, but a Celebration of Life is planned for the near future. If desired, contributions may be made in Ruthann’s name to Benton Hospice of any local animal shelter. Please share your thoughts and memories for the family at www.demossdurdan.com

Local resident Ruthann Root, and beloved wife of George Root, passed away May 4, 2015 at Regency Park Place in Corvallis after a lengthy illness. Ruthann was born April 13, 1930 in Mansfield, Ohio to Perry Bush and Floda Eckerly Bush. The first... View Obituary & Service Information

The family of Ruthann Root created this Life Tributes page to make it easy to share your memories.